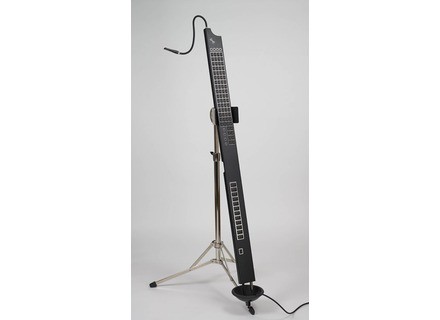 Eigenlabs Eigenharp Tau
5
I have for many years played various instruments both physical and electronic - but this was the first instrument I ever came across that truly combined the best of both worlds into an accessible, expressive, playable form.

This is unlike any instrument you've played before, so there is a steep learning curve. It is, however, a curve well worth climbing. Not just because you get more from your Eigenharp, but I found it helped me look at music and playing in a new and better light. I learned about more than just the Eigenharp when playing it - it helped manifest aspects of music I had never thought of or encountered whilst struggling with the physical aspects of other instruments.

Because the Eigenharp uses virtual synthesis with AUs/VSTs you can play pretty much anything you want and sound good. The sensitivity of the keys in 3-dimensions allows you to affect the parameters minutely so I find it particularly suited to modeled instruments like guitars, breath instruments and pianos. You can bring that human variation to the sound. Of course, the filtering and parameter control you can apply via these sensitive keys to true synthesizers produces interesting opportunities, too.

The Tau is priced at the point of a decent guitar or keyboard. I think you can get a lot more out of the Tau and so is better value for money - there is however the need to learn how to get this value, which takes time. Unlike learning with a cheap guitar before you upgrade, there is no cheap alternative to the Tau. The smaller/cheaper Pico (which I also own) helps introduce you to Eigenharps, configuring them and the basics of the keys, but IMHO its more a controller than an instrument like the Tau. Making music with the Pico requires more layering and looping, which is different in style to playing the Tau and Alpha (though the same techniques can apply). Its like learning the ukelele vs. the guitar. Helpful but not the same.

There is not much help out there to learn to play the Eigenharp. There's plenty of info and community support for the configuration and use, but not the playing. So I wrote a few apps which I've shared to improve this (see http://eigentab.net) but it remains a challenge for noobs.

But like most instruments, playing and discovering is the best way to learn - and the Eigenharp is a delight to play.

One of the best aspects of the Eigenharp is the community - which includes players and the staff of Eigenlabs. There is always someone willing to help. If you find a bug or have a suggestion response is rapid. There's even regular Google hangouts if you want to talk/play together...

Knowing what I know now? Yes. Absolutely. In fact, I thought of the Tau as an entry to the Alpha - but I'm not sure I would swap. I like the solidity, robustness and style of the Tau. I don't miss the extra keys and the software/capabilities are exactly the same. If you're thinking Eigenharp and the price of an Alpha gives you a nose-bleed : go Tau! You won't regret it.

PS. To classify it a "MIDI controller" is to misunderstand what you get with an Eigenharp - you really need a new category.