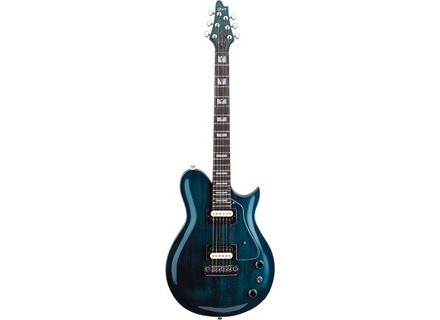 CL200, Other Shape Guitar from Cort in the CL series.

julamarre0's review (This content has been automatically translated from French)

Cort CL200
5
The guitar was made in indonesia (now the production is stopped, it has 22 frets medium, two double-coil passive looks "zebra" driven by a 3-position switch, a bridge-like tune-o-matic without stop- bar, poto volume, one tone. the handle is in two parts (head-neck connection) and is screwed to the body. it is not super pretty, but at the same time, it is not the extravagant Nothing shocking, just bathed, and the finish reveals fine veins in the wood.

The neck is quite thin, very nice, I think, both for the rhythm if you feel the urge to chain the sweep, the tapping and all the rest). If the access to acute, I find it super Choupi,: \ but there's still much worse. say that by keeping the hand "right", it goes to the 19th box and it takes a little twisting to get the 22nd. other than that, the shape is pretty close to a Les Paul shape, but the CL200 is much lighter, well balanced, very comfortable to play standing up, it's really not a bad back and that's a really good point! adjustable speed of sound is preferred by the small number of potentiometers that do not really with the versatility of this guitar is pretty amazing to watch that.

Instead, I play metal and this guitar makes me happy, really. a year ago, I changed the original pickups for seymour duncan put: one in 59 serious and one in acute JB. it really changed at all levels especially in its relation to the micro serious: the first time I played, I thought I heard a les paul: \. I am not a fan sounds bold, but playing on the pitch, it casts a wide net, and although my style is metal, it may well play rock, jazz, blues etc ... sounds very good, I find

I use this guitar for 4 years, 1 year with the new pickups, this is my first electric and I really do not part with it. I own an ESP MII, which cost me € 2000, great guitar, too, but I always more fun and express myself better with my Cort. I love its simplicity, versatility, ergonomics. all the models I tested equivalent prices in store, it always seemed to me supèieure. I like her look a little less, but I think changing the color and the hardware one day so the concern is resolved. I find the price / quality ratio copy, but we can not repeat this choice since it is produced XD.

Dl71's review (This content has been automatically translated from French)

The handle slides well. Access to treble was a bit tricky at first ... I now believe it was me that was not used to play in this part of the handle.
It weighs 3.3 pounds and is very comfortable to hold. This is the most enjoyable guitar to play I tried actually.

In the past I thought the sound was bearable but it lacked clear attack and brilliance short, 2 humbuckers were too round. In the same distortion problem was worst in ... inaccurate and too low.

I then changed the micro side of a bridge-type micro Bill Lawrence and there was all good in distortion as clear.

Then I sold this guitar but I really missed a lot ... so I managed to find in one and frankly with another amp has good sound in distortion or even clear of origin (for microphones of origin).

I again changed the original pickups and put 2 EMG HZ ... While there, the violin is terrible and the sound superb. Sound requires quite a few settings toutesfois end because this guitar delivers a LOT of bass.

You will read this and if my criticism of the basic sound of the pickups are not totally unfounded, the fact remains that the original pickups are fine. Better than the EMG to play some funky things or like "blue hotel" if you know what I mean. Today (October 2007), I bought a second Cort CL200, in blue this time and I'll let the original pickups on it. The sound in hot and unlike my first impression, it does not Gleta too. I think I was not able to appreciate them and that my means of amplifications were bad. There, I have a VOX and it is the foot. 10/10 because even if I had criticism about it's more a question of specificity of default.

I play a little bit of everything ... reggae influences to Metallica through Bowie and so on ... With the microphones the original parties "harder" of my influences were impossible to play. With the new micro (30 E) is a very versatile guitar and pleasant.

I do not usually play with an amp but a "beast" basic sound card. I have a little amp still unmarked. I can get almost any sound I want with a soft. But with the original microphone was limited to the clean sounds.

Since I bought a vox AD50VT and I can say is the same footing with the original pickups!

I for 1 year. I bought it used 150 E. I played a Squier Stratocaster before and I found limited ... it lacked roundness. I tried everything that came into my hand used guitar this price. With experience and in this price range, I would do this choice.

Other Cort other Shape Guitars