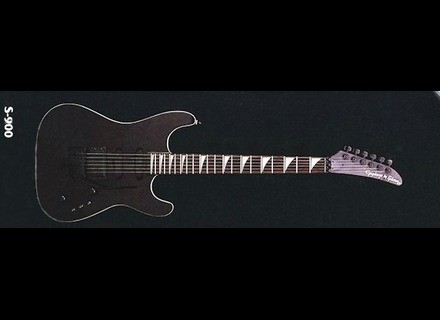 S-900, Other Shape Guitar from Epiphone in the S series.

Epiphone S-900
4
I bought it in 1988 from a local music store. It had a small blemish (slightly darker area between the neck pickup and the neck..never notice it from 4 feet) so I got it for $199 new. I was 17 and playing a Hondo hollow body POS.

This is what seems to be a pretty rare model. Every shop I talk to wants to see it. It is a strat copy, neck thru, alder body guitar. It is antique white mettalic, S-S-H config, a steinberger tremelo, 1 volume pot, 1 push-pull tone pot, and 3 - 2 way toggle switches. The sustain on this is incredible! Clean tones are rich.

The neck is pretty fat, I prefer thin and fast. I can't seem to get the sound I want distorted, but I think it's a bad amp to guitar match. I need a Marshall!

A little story...
I was on an Amtrak train, the guitar was sitting in the seat next to me in a gig bag. We were going 58 MPH, and ran into a stopped freight train. The guitar suffered 2 chips, and the volume pot was pushed into the body, leaving a minor half moon shaped crack in the paint. I suffered many more injuries, so it's tougher than me!

It's not the fastest or easiest playing guitar I've played, but it's above average. The thing is a tank, pretty heavy, and has been a loyal companion for 15 years now, so I can't complain. They were only made from 1985-1988, I don't think there are many around.

Other Epiphone other Shape Guitars