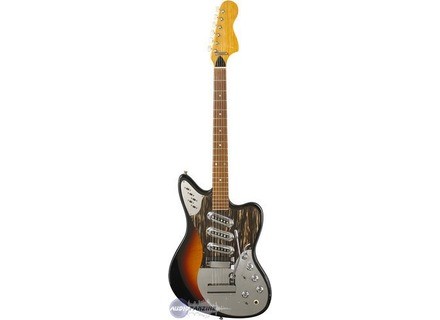 Framus 5/168-54 Strato Deluxe
5
And now, notice that guitar until then would have been the hardest to do.
Made in Germany.
The model I use is from 1967.
The neck profile C, with 21 frets (one fret 0), and topped with a rosewood fingerboard. The handle is made of wood multi-laminate (used for rms of boats, the peculiarity of design that greatly reduce distortion)
I have no information to the timber body. The only info I have is that it is a building called "sandwich".
The finish is chrome.
Its shape is similar to Fender Jaguar / Mustang.
It has three microphones of simple design Framus.
The electronics are quite complex and it was impossible for the moment to get your hands on a manual or determine the exact function of it.
A preamp is integrated and acts only on certain positions of the selectors.
She is originally equipped with a damper (damper) fold but was not present on mine.
There are 2 volume knobs and 2 tone.
And there is also the "organ effect", which is in a final volume knob spring, but through its use provides very interested her effects (tremolo, violoning ...)
The bridge is a specific Framus vibrato.

Here we have an extensive guitar, and unfortunately, as a result, very complex, especially as GUIE find a use after all these years is a challenge. Framus Vintage Mee and electronics department of Warwick (who later acquired the brand Framus) have not been able to find me a wiring diagram. Nevertheless, collaboration and investment is very significant.

The neck is especially nice, the form allows a quick game, and a firm grip. The radius is fairly light but allows for the bars with ease.
Access to treble is excellent, I can access easily to the 20th fret of the E string without serious struggle.

The body shape is very comfortable, either sitting or involved in play standing.
The weight is reasonable, although a bit heavier than a strat it does not tire during a concert of 2 hours. But after six hours of repeats, the research still a chair quickly.
It sits above one realizes that it is not so light that it&#39;s fast enough that it blocks blood flow to the thigh.

Balance is excellent, it looks neither side head or body side, and suddenly, it&#39;s a pleasure to be able to let go of the guitar, grabs the microphone with both hands to pass a vocal and rest your hands on the handle without looking, because it is exactly where he was.

The vibrato is very stable and efficient.

Unplugged, the guitar already sounds not too bad. This is also surprising to hear as clearly notes a solid-body disconnected. We can already guess that nothing but the sustain should be pretty good.

I&#39;m looking for her faults, I do not see at the moment, I is thus a 9 in use because perfection is not of this world

I play in style, cold-wave/rock, and my touch is enough post-rock and bluesy.
In other words, it suits me admirably.
I could play a Silvertone amp in LAMMPS, a Fender Twin and everb through a PODxt Live.

The types of sounds that you get are particularly varied from electronics (which I recall a real gas plant).
It&#39;s gonna sound of the strata of the foil tele through the bite of the jaguar.
The only sounds you get it with, are those of the Les Paul ..

The clean sounds are of exceptional beauty.
The dynamic microphones is exceptional. Although they are powerful and simple, you get to keep a clean sound very pure, very airy, with well-defined bass and treble that peuvnt be very percussive.
The harmonics are very rich and "alive".
Through a good delay pedal, you get easily plan and rich groups of post-rock.
She also officiates eexcellente to handle the styles pschobilly / rockabilly sound and all 60&#39;s.

is in its saturated it reveals its true character (and arguably not lacking). Though it comes easy to saturate a signal, you can forget the metal with, it has a "touch of madness" unpredictable and wild fit for Fender jaguar. We are far from its very straight and controllable metal guitars.

Here, the harmonic fuse in all directions, was a grainy side, and Medum have a very feline side. I&#39;d say it&#39;s going to roar meow.
Lovers of overdrive to Joy Division / Interpol / She Wants Revenge, will be delighted here.

The big feature, I restates, the harmonics are who give the charm of this guitar. is typically the kind of guitar very wild like to be "abused", with sounds on the edge of feedback, and more betrays the touchr guitarist.

Quite honestly, there is no sound that I hate with this guitar. But both say that it will satisfy my humble opinion, not a metal.

It uen guitar to "tame" it has such a character we do not know from the start how he must play for the ring, miais once we know it is the door open to happy. And yet, it can still surprise you at any time so it is responsive to an overdrive setting, a different EQ.
It is never safe from surprise by the life that seems to emerge from this guitar.

One big flaw, the complexity of electronics makes it difficult to take a guitar in hand.

I use it now for 2 months, and again in concert.
The characteristic I like most is his temperamental side and impetuous in the sound, the outstanding balance of the instrument, the confortabiité copy of the handle.

What I like least (but, paradoxically, more), the complexity of the electronics.

I have many solid-body guitars, and a half box, and I was sure to have a range of sounds as complete as possible before trying this skyscraper.

Lrsque I tried it, it was initially out of curiosity, just to look and see what it gave, and we can really speak of a thunderbolt from the first notes. And love is growing, it became in a short time my favorite guitar

S I would do this choice? Well it will soon myself delivered a similar model, golden finish, but in 1965 and internal preamp that faith without it.

Other Framus other Shape Guitars