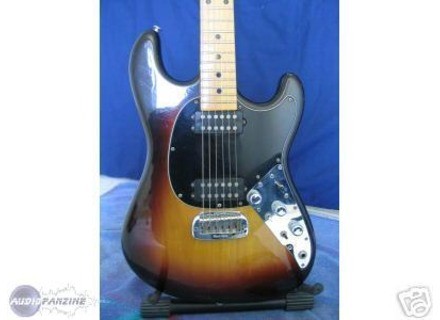 Sabre I, Other Shape Guitar from Music Man in the Sabre series.

akapelis's review (This content has been automatically translated from French)

Acquisition in 1992
Did you find this review helpful?yesno
»

domgt40's review (This content has been automatically translated from French)

Music Man Sabre I
5
My Musicman Sabre is 1979.
United States manufacturing era Fender Lo (not ernie ball)
two microphones "countrv handmade" and not one (unlike the Sting Ray)
c&#39;tait the top of the range of the era and the second microphone is definitely a plus;
I have since bought a hritire lgitime "real" musicman, a G & L but this time with only one paved and I regret it because amrement trs often, I feel frustrated not to have the versatility offered by Sabre.
The series of Musicman was THE FIRST to introduce an active prampli. Almost 30 years later, it still sounds as well!. The phase inversion coupled with the brilliance switch allows sound tr s original, especially when you slapper (new String Necessary for pleinemment ... enjoy two or three hours, no more!: o ().

The handle is carrment gnial, fine and relatively strait to the head.
It s&#39;paissit fast enough when you go up, however, but still extremely enjoyable to play.
The space between the strings is relatively high at the bridge (and hyper molded solid) and can interfere when you are not used to.
I made my refretter Sabre Nicolas Petitbon reponce me that this occasion the key (Mapple) that silent full of cracks and wear a revarnished. He also chang rod "truss rod "that dead silent (no screws foir.Il has been the standard work because n&#39;tait not win.
I take this opportunity to make it a little pub and thank him because it is a good trs trs this small;.) (DNG Workshop, Paris Twelfth)

The Sting Ray is far less versatile it!

I&#39;ve had prs 20 years, and the paint is abme (a rather ugly brown paint, it must be said).
This looks like quite a low precision and I confess it is less beautiful than the Sting Ray, whose proportions are more than Aesthetics. However, for anything I did would change against a Sting Ray dernire although this is now much more rating (new, yet more silent the Sabre CHRE!). It would be too frustrating because the sounds "in addition" would miss me terribly ... and sound, even when it is for me, the main ....!
Report qualitprix excellent since I bought used for a clip Pascals a time when these low taient seen as almost "tacky" in the 80&#39;s "sham & Fluorescent ". Moreover Musicman had ceased to exist after the bankruptcy of Leo Fender who was unable rsister invading Japanese basses and guitars. (What&#39;s katanas!)
Leo Fender G & L cra then with his friend George Fullerton in the same space of his studio in California Musicman (retaining its machines). Today G & L is still dsormais but some models are manufactured in Asia (as George & G-L-as Leo) Leo sold the name "Musicman" Ernie Ball later said that the manufacture of these MODELS remaining close enough to the originals. The Sabre does not, however, remains in the range, at least, not in France and I think that Persits is a mistake. (Of all fa ons, I do not like the Ernie Ball Musicman when I compare them to authentic ..toucher / her still owe me an Ernie Ball Musicman peu.Les are "reissue", he fautle know, even if they are indisputably good quality bass trs!). For those who do not know, the good old Lo was cr Musicman APRS selling FENDER "CBS in the late 60&#39;s.
The "Sabre bass" is terrible and REALLY underestimate trs. Read also think that this bass amricains on Harmony Central, their happy homeowners all agree!.
I do not know him that two gure default: not a gniale Aesthetics (especially since the paint used the era of quality seems trs average) and a weight gnral consquent enough.
For the rest, everything is really REAL!
I note that I possde over 10 bass, all excellent and well made trs (over time, is selected!): Musicman, Vigier, G & L, Gibson, Ibanez, Aria and I .... test instruments for a few hundred concerts .... 10/10 is my crdible: Sabre this ..... I love it!

Ah, a little "dtail," there are little russ selling copies on eBay (almost always Asian) of guitar brands that have all the appearances of the authentic infringement has become a true industry because they are really trs dous. There are even just logos perfectly mimics (all brands) to make up any old pole fry ... Old or new, of course, like "PLO!"
So it&#39;s good to know: you mfiez trs "good business", there is often a catch-boobies hidden derrire. It can rev rate price of playing the fool Service !
Here, for example a photo rcupre eBay: the wise ......!
False logo "Professor Ernie Ball" by Sting Ray
.. Oh the beautiful scam!.

See all 75 photos of Music Man Sabre I »