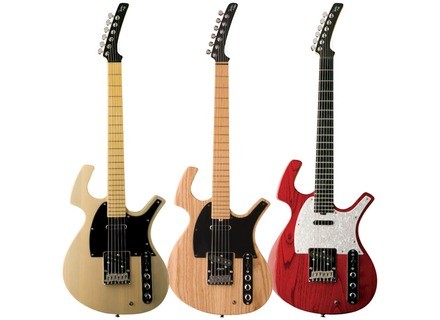 P-36, Other Shape Guitar from Parker Guitars in the P series.

This particular guitar is an interesting entry from Parker. Parker Guitars is usually thought of as a very forward-thinking company; their Fly guitars completely rocked the musical instrument world on their introduction in the early 1990s, and features like carbon-fiber backing and fretboards, stainless steel frets, and piezo-acoustic systems were heralded as the stuff of the future!

This P-36 is a lot more of a traditional instrument, with fewer "futuristic" amenities. It does still includes the distinctive Parker shape, as well as the Fishman piezo system. Other than that, this is basically a Telecaster! It has none of the carbon fiber, stainless frets, or Parker vibrato system, but it does what it does very well.

This guitar, like most Parkers, is very versatile. It includes the ability to switch between the magnetic pickups only, piezo only, or a blend between the two. The piezo is pretty cool - some interesting acoustic-type sounds can be hand, and onstage, it certainly gets the job done. Otherwise, the magnetic pickups are very similar to a Tele - a bit noisy (they are single coils), yet bright and cutting on the bridge pickup, warm and smooth on the neck.

Compared to other Parkers, this guitar is fairly traditional. For a Parker enthusiast that really wants an inexpensive Telecaster-style guitar for the arsenal, this is a fine choice. Others, that just want a good, versatile guitar that stands out, will also be happy with this axe.

Handle on top I think, not much radius, thus fairly flat.
Comfortable and fast (like a metal fretboard) and also very fine.
Good ergonomics, not too much weight.
Access to acute nickel.
The guitar sounds on many amp configurations.

I play funk, blues, it sounds telecaster there's no doubt.
I played with a Roland "bolt 30", clear sound and crystal-clear overdrive wishes.

I use it for 3 months.
I tried a squier telecaster.
Most is the comfort and sound.
The least that the modern design that does not everywhere.
The value for money is good OCCAZ purchased for € 390 with seymour in bridge, I think I made a very good deal.
For the same budget I would take for a higher budget, I'll have a strat blade ...

Alexthefunk's review (This content has been automatically translated from French)

Bridge: the octave, the guitar was far too high to believe that the bridge had been placed near a cm too high ... I get the elements of a bridge base, reaching even up against the Mi ... no top!

Color: mine has finished "natural" (see photo product to the top of the piezo stroke zoom) it looks nothing like the picture you can see on the official website of the brand (not at all representative of the color rendering of the varnish!)

The handle is extra, no inserts the key does not interfere with the "readability" of the handle (there are small dots on the side anyway). The varnish (satin) never sticks, even after long hours of scratching. Sliding on the handle is perfect.
=> After a year of use I find the handle a little too large ...

The cutting of the body slightly rounded at the joint body / neck and asymmetric screw easy => Access to acute no problem.

The guitar is frankly slightly less than 3.5 kg

Hot on his neck, with both twang, rock on the bridge. The sound is really good, but the real slap happens with piezos ... mixing them with Scoil you'll get your ears clear sound and crunch. (Not ideal for metal ...)

By measuring the volume of the piezo you just get the foil and the presence desired => sound a little gypsy-jazz with the neck of Scoil, fantastic!

Mode piezo only have to play clean ... errors do not forgive, the sound is excellent! To use this configuration requires a very high action strings or you may get the frisotis ...

I think changing the Scoil the bridge humbucker for Scoil format for versatility with distortion ... but to think.

I for 1 year
The pros: clear sound, the piezo, weight, look
The -: not intended for saturation and metal
I would do this choice.

douglove's review (This content has been automatically translated from French)

Parker Guitars P-36
3
It sagit dune Telecaster type guitar in Parker dguise unless it is vice versa:
2 microphones the Tele, bridge the Tele, the Tele a slecteur the rest of Parker.
A piezo (Fishman PowerBridge).
Cest frne the marsh (not too heavy), handle Saddle / Saddle button.
I say all of a head because I dont have this guitar.

It is simple like a Tele but you can add the sound of the piezo.
Note also that theres a model that has Fender Tele with piezo (Nashville Power Telecaster).
Pluttdu by the handle, closer dun dun Parker stick handle Tele (Parker's low prices should not be confused with carbon fibers dune Fly Deluxe) Must say that I 'm not Joe-who-plays-fast up, rather the guy who chained agreements PPRE.
From memory, frets ntaient not tip top. Action very (too) low.

I find that the sounds of dorigine microphones were too close to those of the piezo.
I nentendais not much diffrence between the user and the microphone only mode piezo pickups +
It is noted that the piezo didn't rglage in shade (just a volume knob) and the button tone microphones was not much.

Ive changed the pickups with microphones more serious tone and actually the fact of adding the sound of piezo pickups added to the sound of something, a ct more biting, more crisp.
I think the overlay + piezo pickups is better suited for humbuckers.

I havent ever tried a Piezo acoustic amp, but that was mest davis should not be pretty nice (in solid body on piezo frne, there is not much vibrate the inside)
The piezo should be used to troubleshoot is (the time to make 4 steps dintro for a score for example) or to add a lil something to the sound of the pickups (it is the piezo-m rgl Plutt me in treble, has added some teeth and full of sounds of fingers wander over the strings).

The pickups are simply a little noise, but when lon adds piezo is happening in electronic active (piezo Pramper has its own food by a 9v battery) and much more cest clean.
Just for a, a lajouter's worth all the time, even lower its volume if necessary.

I'm tired of this guitar, actually I think I'm not really a guitar of this type
As for looks, we like it or not Naime
Me, the end, she escaped through her eyes!
Cest lentre range of Parker, its not good quality that has Dausse

Other Parker Guitars other Shape Guitars