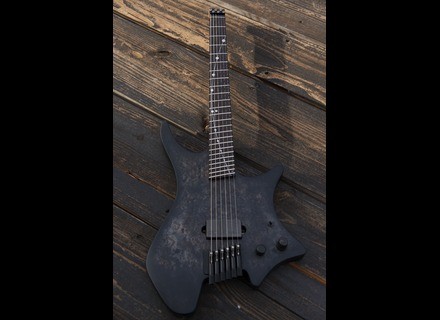 FEATURES
The Masvidalien Cosmo has the well-known Boden shape, unique with different features in sound/tone shaping. There’s a reason why I’m very fond of the Strandberg guitars, and it can be explained through comparison. Its shape and extremely light weight (5-pounds), makes it a pleasure to play and its compact design feels more intimate and personal when played.

This is a new Strandberg guitar for 2018, and a second [available] signature guitar of Paul Masvidal, best known for his work with the group Cynic). Paul’s other signature guitar, which has the ‘Varberg’ shape, is eye-catching, but when Paul gets excited about a new signature guitar project it’s easy to get your own curiosity peaked.

Based out of Sweden (with this model made in South Korea), the Masvidalien Cosmo has a roasted maple 20-inch radius neck, 24 Jescar 57110 stainless steel frets, and an ebony fretboard with Paul’s custom inlay (which I refer to as an Orbital inlay, since it reminds me of planets in an elliptical configuration). It has a graphite nut and a modest multi-scale layout (25.5” [low e] – 25”) that offers a more even tension among strings when compared to a single/standard scale. The edge of the neck has Luminlay (glow-in-the-dark) offset dot markers. The three-piece maple neck is reinforced with 2-piece carbon fiber rods and a dual action truss rod. Easy access to the truss rod allows you to give a few turns for lower or higher action than is provided via factory setup.

Further to factory setup and standards, each Strandberg guitar comes with a 32-point USA quality check list, check-marked and signed by a technician. This list references the model, part number and serial number while inspecting areas of the body, neck, components, function, adjustability, tune/setup and a play test.

A unique feature to Strandberg guitars, including the Masvidalien Cosmo, is the patent pending Endurneck, which has flat surfaces rather than a rounded surface. This geometric design increases thumb surface area contact, thus making playing more comfortable, relaxed and efficient. In effect, the angles of that flattened surface interact to encourage a more correct playing position and a straighter wrist (also, the flat surface slopes down from the end of the neck and toward the bridge), and that means less strain and fatigue of the wrist and fingers.

SOUND
The overview (review) video included in this review provides some sound samples, as I demo the pickup and VCM knob on a clean channel of the Carvin Legacy III amp. Then later in the video you can hear a short composition that includes various levels of compression, overdrive and echo through the Carl Martin Quattro (going into the Carvin clean channel). I’m also using Spectraflex cables (love their clarity) and the Blackhole pick by V-Picks.
Active pickups have come a long way from the early EMGs (which I found a bit ‘in-your-face’ and one dimensional). Now you can get active pickups that resemble the nuances of PAFs on steroids. The highly reactive EMG 57 equipped on this guitar has a unique combination of Alnico V magnets and steel pole pieces, which gives that PAF quality in its tone, yet its ‘active’ attribute provides more headroom and punch. In effect, the EMG 57 gives off subtle nuances, dynamics and transients, but with greater definition, presence and aggression – and while remaining quiet. I must add how super clean this pickup is; you can throw in reverb, echo, different modulations and gain/distortion and the sounds remains crystal clear and articulate. I compare this to other high-end guitars I own and they sound slightly to overtly muddy in comparison.

This guitar also is equipped with an EMG VMC (volume mid control) knob – a two-part knob consisting of an upper and lower part. If the upper control/part remains in a middle or neutral position, the signal remains flat, but if you rotate it counterclockwise you cut the signal (produces a nice Strat-like tone), and if you rotate it clockwise you increase the boost up to 12dB (ideal for leads or sections of music meant to stand out in the mix). The bottom frequency knob allows you to sweep through the mid-frequency band (from 100 Hz to 100 Hz) for additional tonal options, giving you sounds that are deeper and fatter or thinner and cleaner.

The two-way switch either places you in a position of using the pickup without the VMC knob or with the VMC’s electronics. The volume knobs works in either position and in the same obvious manner. The guitar’s dynamics also rolls off very nicely, cleaning up the gain/distortion as you lower the volume, but without sounding weak.

Action, Fit & Finish
The Masvidalien Cosmo came with very decent string action; although you can adjust each individual bridge saddle up or down to affect each string’s height. The intonation was spot on except for the G string, which took only a few minutes to rectify. I really like the bridges tuning knobs – the feel and knurl are improvements over the bridge used for the Boden Prog 7, which has the EGS Pro 5 Bridge.

The poplar veneer top is very unique and shows a great galaxy type patter, particularly in bright light, which likely is why it’s part of the ‘Cosmo’ line for 2018. The Cosmo’s edges and back are beautifully finished with no flaws – in fact, you can’t tell where the ash ends and the maple top connects. The thin body is made even more comfortable as it includes a torso, arm and heel bevel, all smooth and silky with its satin finish.

The neck is highly professional, in both quality and fret dressing. The frets have a slightly rounded edge at the ends, making the neck’s edge smooth and silky. String bending and vibrato is almost effortless on this guitar, as I found with the Boden Prog 7 – requiring a light touch with minimal finger strain and fatigue even after a few hours of play. I could not distinguish any fretboard filler, either at the frets or around the markers. The routing for pickups and bridge also are flawless. All hardware comes black or black anodized; even the pickup is brushed black chrome. I’m uncertain if any other combination would look right on this ‘spacey’ model. This guitar stays in tune very well, being able to play for several hours before having to slightly adjust the tuning knobs.
The guitar jack is my favorite in design. The cable produces a very solid click when pushed in, as though locked in position, and its angle is down and in (about a 45-degree angle), which means even if you step on the cable it would not come out, but remain jammed into the body. As well, playing in a seated position the cable remains unobtrusive as it curls overtop the lap.


OVERALL IMPRESSION
The Strandberg body design did not come about unintentionally or because it looks different or unique. The double curves along the lower edge of body allows you to place it in two different positions on the lap, whether playing in a more conventional style or propped on your leg like a classical guitar (which forces you to sit more upright and avoid slouching, which is nice if your back begins to tire from conventional positioning).
The swamp ash and maple top combination produces punchy high-mids and tightness in tone, which really comes out in the mix with the EMG 57 pickup. The EQ variations in the VCM knob produce some nice low-mids that remain very clear and ideal for that full-bodied blues or jazz sound, which makes a neck pickup obsolete on this guitar (and the main reason for only one pickup at the bridge). The tone also is incredibly clear, even with distortion or fuzz.