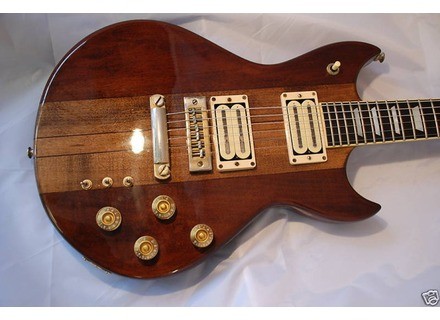 Custom 24, Other Shape Guitar from Vox.

BigB's review (This content has been automatically translated from French)

Very nice violin work with a handle driver / maple core (to be checked but it looks like a lot) and mahogany, and two "wings" made of mahogany. The body is small enough (and compact ...), and all incredibly heavy for its size (those who take it in hand for the first time are always surprised, guaranteed), more than a good Les Paul. From the grip, you feel you have to do a quality instrument.

The handle, inspired Gibson is fine and comfortable, and really allows comfortable access to the 24th box - in fact, arrived there, the problem is more related to the size of the boxes that access! - )

The machine is incredibly heavy - more than a Les Paul - but perfectly balanced and very comfortable with the beveling of the tour and of course a slight upper back. You can move in all directions, the instrument is properly seated.

The action is (on mine anyway) very low, the frets are almost forgotten, even before plugging it in, we feel we are dealing with an exceptional instrument, both in terms of comfort game as the response and sustain.

Let us first see the beast with microphones of origin:

Let&#39;s be clear, despite the possibility to split the pickups, it is far from the crystalline sounds of a Fender. This guitar is probably the fattest sound I&#39;ve ever heard, yet thicker than a Les Paul - the point that it takes a little time to learn to tame the beast and leave nothing but a thick puree.

Once this step is very bad, with a monstrous sustain, harmonics whistling, and a good response to the nuances of attack. Very (too) sharp and aggressive on the bridge pickup, more round and warm (and very mushy ...) on the neck pickup. And if the parallel switch is not very convincing on a single microphone, used in combination of two microphones (with one another in parallel and in series), with or without phase reversal was already a beautiful palette of sounds available. In all cases, given the output level of the microphones, the sound is never really "clear", except to play on the volume knobs. And that&#39;s where the rub: can not have a clear right <img class="smiley" src="/images/audiofanzine/interface/smileys/icon_cry.gif" alt="" /> . We do not find anything about the qualities of the guitar played unplugged, or the "chime" or treble the "singing" of the mediums ...

In short, as is first and foremost a guitar enthusiast for big sound mushy.

Once the pickups replaced with good humbuckers alnicos with an output level a bit more reasonable (to bareknuckle crawlers in this case), the guitar was transformed. Finish the look sloppy and mushy, finished the clean sterile, finally found the sound of "wood", the clean and crunch are purely magnificent, worthy of clapton period Beano on the sleeve, not far from the rick bridge, almost acoustic in the middle position, the guitar sings literally is a real pleasure. By pushing the gain, we find all the rage and power forward, but the sound is always well defined even in heavy distortion, all the nuances of play emerge, it is close to nirvana rock&#39;n&#39;roll. I put an 8 for the average between the two configs - with BKP, she deserves at least 9.

I bought this beautiful beast in the early 1990s, and it almost exclusively since my only intrument. In truth, the love of my life, and if I wrong sometimes with her little sister (vox standard 25, a strat-like), I do not intend to ever part with it. It has me at the time offered to 20 000 FF (approx. 3000 Euro) in cash, knowing that I had paid 2500 FF (approx. 380 euros), and the answer was always "nyet."

In thirty years of practice, including 5 during which I worked as sound engineer (studio and live sound 24 tracks), I saw a bunch of shovels, some part of legend, so I think I have reference points. And I do not hesitate to say this is probably one of the best guitars ever built. It is very unjustly unknown, and even more unjustly underestimated.

Despite its relative raretée, we see spend approximately every two years on ebay, usually at around 500 euros, which is laughable considering its quality is largely the height (and IMHO well above) the average of modern Gibsons sold over 2000 euro new. If you see a pass, please, there is little chance you will be disappointed.

Other Vox other Shape Guitars