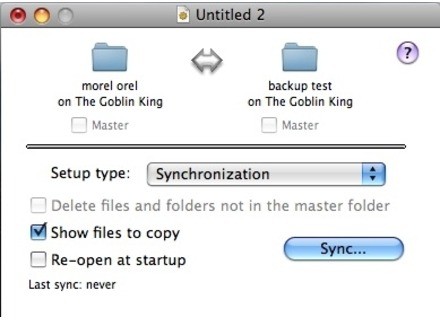 Synchronize! X Plus, Other Software from Qdea.

Qdea Synchronize! X Plus
5
The Qdea Synchronize! X Plus is a great program for backing up your data on your Apple computer. I’ve had this program for about a year or two and could not be more happy with it, as it makes backing up and synchronizing drives easier than ever, which if you’re doing it a lot you know can be a pain at times. Downloading and installing the program was easy enough as I did so right from Qdea’s website and had the program up and running shortly afterwards. Using the software is also quite easy, as it’s got a few modes to choose from. With this version you get either backup or synchronization mode, the Pro mode has more options I believe, but for me this is enough. In back up mode you choose a master folder and a back up folder, while in synchronization mode you’re just choosing two folders which you’d like to synch up, meaning whatever files aren’t in either of the folders will be copied to the corresponding folder. This is the mode that I tend to use, as it doesn’t hurt to be sure that you have everything you need in two places rather than taking the chance of doing a simple back up. It’s really a very easy program to use…

I’m currently running the Qdea Synchronize! X Plus software on my Mac Book Pro lap top which has a 2.2 Ghz Intel Core processor and 4 GB of RAM. You really don’t need to have a very powerful system to run the software, so pretty much everyone should be able to run it to it’s full extent without issues.

Getting the Qdea Synchronize! X Plus software was one of the simplest and best purchases I’ve made in terms of programs that give you a lot of bang for your buck. Before I had this, it was much more of a hassle to back up sessions manually, but this makes it much easier and quicker as I don’t have to worry about copying over anything or having enough space to make a completely new copy. Everyone who is backing up large recording sessions or other large folders of data should absolutely consider Qdea Synchronize! X Plus or Pro as it’s so cheap that it’s almost a no brainer…