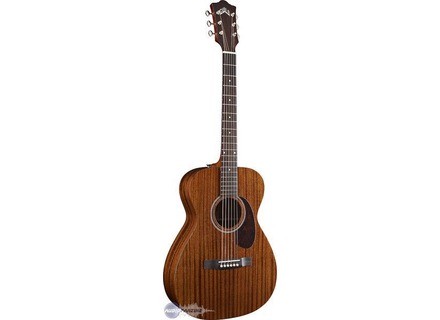 GAD-20M, Other Steel String Guitar from Guild in the GAD series.

saturax08's review (This content has been automatically translated from French)" Absolutely wonderful!"

Nice guitar playing. Action very easy. Ergonomics. It is also perfect agreement.
Its size makes it very convenient but does not sacrifice the sound and the case is provided a haven of beauty for what appears to be a gem of guitar.

A marvel. It simply sprayed all mahogany Martin of the same size. The sound is much more warm and rich, much better than Martin. In fact quite comparable to the sound of a Santa Cruz 00 1929. I compared the two and I see no difference except the ebony fingerboard on Santa Cruz, but does not fundamentally change the sound. I even tend to prefer the guild though it is much cheaper. The projection is simply unbelievable for a guitar of this size. And the sound of a rich and unparalleled accuracy

This guitar is a real jewel. The finish is incredible, she is very beautiful and above all sounds incredibly well. The first M20 called "economy" M20 because it was simple and inexpensive. Santa Cruz shows that they were inspired by a model "1929" (year of crisis) that looks exactly like this guitar. Only the guild is much more a visit. I do not part with this guitar for sure. There is also now a model M 120, which replaced the M20 Gad. The only difference being in the saddle Nubone instead of the bone, this guitar is also excellent. The Santa Cruz is well worth 3000 euros for a guitar that is equivalent to this one!

Other Guild other Steel String Guitars