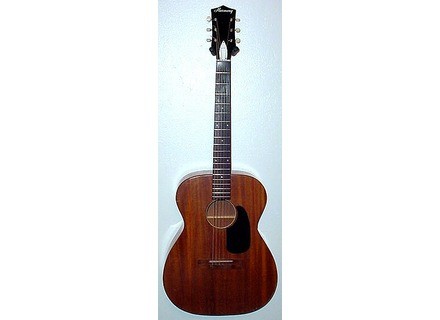 Harmony (String Instruments) H165
4
The Harmony H165 is an flat top acoustic guitar, made mostly in the 50's and 60's but was also made in some capacity in the mid to late 40's and the early 70's. I don't know exactly what year the one I've used was made, but I would think it's somewhere in between. The studio that I work at has one of these, and while it doesn't see as much use as our Martin guitars, it's still a cool little guitar with a unique vibe and sound. The guitar is made out of mahogany and doesn't have any electronics as it's just an acoustic guitar.

The Harmony H165 has a very round neck, which seems to be characteristic for Harmony guitars of this time. This gives it a unique feel that is definitely an old school style and isn't one that you'll see much these days. It's a pretty easy guitar to play for the most part, but the action is a bit high in general for my ideal liking. There's not much wiggle room when it comes to changing the sound, but in general it's pretty easy to get a nice sound from it if you can play.

I'd describe the sound of the Harmony H165 as being pretty jangly. It doesn't have the fullest sound when you strum a chord, but it's great for finger picking and similar styles where you might want the lower strings to kind of jump out at you. It's hard for me to describe exactly what it sounds like in words, but I'd say it's best used for folk and country music, as it just has the sort of vibe to me. I don't know that I'd recommend it if you're looking for a deep and rich acoustic sound, but it definitely has it's own thing going on...

Overall, the Harmony H165 is a pretty cool guitar with it's own sound and feel for sure. It's definitely not your traditional acoustic sound, but there's definitely times where I feel this would work very well. I'm not sure how easy it would be to get your hands on a H165, but a lot of Harmony guitars are pretty similar, so I wouldn't say that finding this one in particular would be the end all if you want a guitar like this. If you are able to find an H165, definitely give it a try as I think you'll like what it has to offer...
Did you find this review helpful?yesno
»