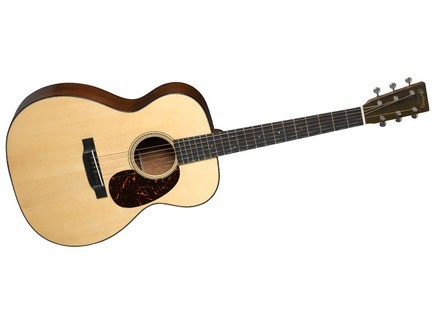 Martin & Co 000-18 Golden Era 1937
5
This Martin and Co. guitar is American made with a mahogany wood, and has an ebony fingerboard. It has 20 frets, but only fourteen are easily reachable.

One of the downsides to this guitar is it's lack of access to the high frets. It's hard to reach past the 14th fret easily, but because this guitar really shines as a rhythm guitar, it's not that much of a problem for me. With the 000-18, its really easy to get a great sound. It plays really smoothly, too, which is nice for people who'll be strumming on it for long periods of time. It's not too hard to carry around with the case, and it's a great, comfortable size for playing.

I like the sound of this guitar a lot. It's very good for recording, and it sounds great acoustically. It's a warmer sounding guitar, with a darker sound than most Martins or Taylors. The mahagony wood emphasizes different frequencies than most woods. It's a unique sound that's hard to replicate with other guitars. It is a great guitar for playing more smooth, soulful music, it sounds comparable to Bill Withers' guitar on his classics. It blends well with my Fender Strat electric on recordings, too. The guitar isn't usually bright enough for me on its own, but that's because I tend to prefer a really bright guitar in general. It does sound great in a more dense mix though.

The sound of the guitar is probably the greatest feature of this instrument, followed closely by the ease with which it is played. These can run pretty expensive so buy used if possible. It's not worth buying at store prices if you can avoid it. I'd highly recommend this guitar to anyone who prefers their acoustic sound darker, and warmer than a Taylor. It's a good addition to any collection.
Did you find this review helpful?yesno
»