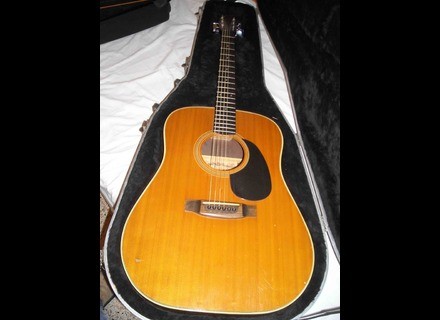 Yamaki de Luxe Folk
5
This Yamaki Custom 12 string Folk AYA 439 S// came to me on the net.I got a great price . Seller thought the neck was warped, it wasn't. Tech replaced nut.That's all. Solid Top, great warm deep bass sound. Pleasant Harmonics. Weighs less than my other 12 strings.A Joy to pick up and play. Nice reddish, spruce or cedar top. Silky smooth neck, great action.Awesome wood grain, on back and sides. Just a great example of Japanese commitment to quality. You can just tell that they were only going to release for sale those that lived up to their high standards.i love my Yamaki 12 string !
Did you find this review helpful?yesno
»

Yamaki de Luxe Folk
4
The Yamaki line of guitars was made in the 1970s in Japan as one of many different lawsuit acoustic guitars at that time. They primarily copied Martins, and I've tried two different ones, a dreadnought style D28 copy and what can I only assume is the Deluxe Folk model (a Martin 00028 copy). The Deluxe Folk model has a spruce top, what appeared to be mahogany back, sides and neck, and a rosewood fretboard. It's a smaller 000 body size and fits to the body a little better than the traditional dreadnought, which is great too. It has a traditional Martin style bridge and sealed chrome tuners.

The design of the Yamaki Deluxe Folk acosustic is extremely good considering the price point they were made to be at back in the day. It's very light, but still maintains a good resonance and thick tone considering the size. This is usually an indicator of quality wood and/or craftsmanship, and the Yamaki has both in spades. It sits very well on the body both as a regular guitar or on the lap when used for slide... very cool. The upper fret access is slightly better on the 000 guitar than the dreadnought because of the small body but it's still a non cutaway model acoustic, so the upper fret access isn't great.

With acoustics that don't have electronics, it's basically what you hear is what you get. Fortunately this guitar has a great tone regardless of its small size and sounds good for both regular tuning as well as slide work (using a raised metal nut to bring up the action to slide-worthy).

The Yamaki Deluxe Folk guitar has a great sound that is prime for fingerpicking and blues. It doesn't quite have the low end or quite as pronounced a midrange as the Yamaki dreadnought but instead it has a more mellow response overall, with a stronger high end sparkle that makes lead lines sound really cool. The guitar sounds great for high chording using a capo over top of a dreadnought playing lower register chords. It also has a great sound for slide as well, and the current owner of the guitar is using it for exactly that purpose. It has that classic Robert Johnson/Son House blues tone that just transports you back to 1937... magical.

All in all I think the Yamaki guitars are really wonderful. This Deluxe Folk can be found for about $250 used, which is an amazing deal considering the quality and tone that it has, especially in such a small package. The old Japanese made lawsuit guitars like Ibanez and Electra are legendary... the Yamakis and such are catching on... so grab one before they're gone gone gone!

plf's review (This content has been automatically translated from French)

The neck is very pleasant, very easy to play
As a folk use LATEST freight is scarce, but the sound is excellent
: Mechanical oil bath home

35 years of use. the era I've tried other guitars, but I did not find a better term report qualitprix
Professional musicians have tried to rgulierement the change (eg Gibson) but I've never cd.

This guitar has played it so ncessaire would restore the top of the neck, but still playable and elleest has lost none of its acoustic qualities
Did you find this review helpful?yesno
»