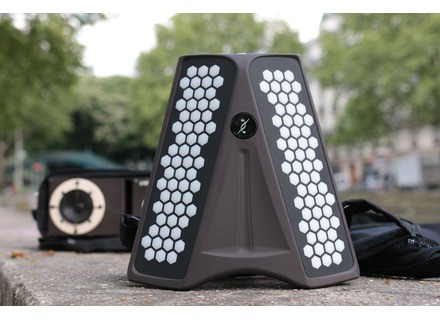 du-touch, Other Synthesizer from Dualo by Intuitive Instruments.

« My own private home studio revolution »
5

Value For Money : Correct Audience: Anyone
I wanted to share my experience with this device after a few weeks using it (and several months waiting for it...).

I originally had a real crush on it while attending a live demo where its creator covered many of my favorite songs with an impressive ease and arrangements close from the original (for those wondering, go and see video demos available on Youtube).

As far as I'm concerned, I'm more the "let's stay comfortably home and make original songs" kind of person, and I really could foresee this device being useful for me to work on my couch instead of being stuck on my chair in between my MIDI keyboard ans Mac.
The result is really up to my expectations.

OK, I can't lie, it took me 2 weeks (at a minimum 2 hours a day) to start taming it. By the way, I'd like to thank the internet tutorial videos. But nothing that compares with the number of hours I used to spend in front of my former guitar teacher.

What I appreciate the most:
- how quick a full song idea makes it from my head to actually being played
- the possibility to get songs on my computer and exchange them with other users
- the mere fact of holding it creates a sort of alchemy

What don't like about it:
- you need to remember to reload it once in a while

Overall, I'am absolutely delighted with this product and I believe the money spent on it will actually get me to spare otherwise as I'm now starting to consider selling part of my gear as I no longer have use for it.
Did you find this review helpful?yesno
Cookies help us improve performance, enhance user experience and deliver our services. By using our services, you agree to our use of cookies. Find out more.