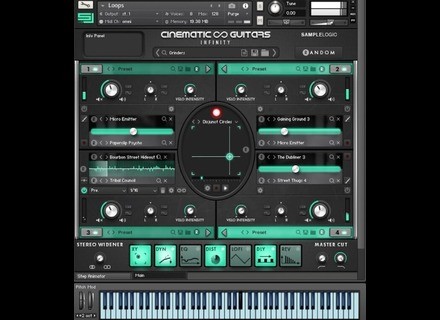 Ericmusicstrasbourg's review"The melodic sound and ambiance that I love for sound for picture!!!"

Sample Logic CG Infinity
5
I use it with Windows 10 and Cubase 8.5 on an i7 6700k through Kontakt 5.5 with 16 GB of RAM – and sometimes it’s not even enough, which is a real pity. It also can be used with the Kontakt Player.

It can work in the following modes/formats: standalone, VST, Audio Units, ASIO, Core Audio, WASAPI, Native AAX – so plenty to do.

First, Cinematic Guitare Infinity is a bundle that contains Cinematic 1, 2 and 3 as well as Infinity, which is the latest soundbank.

It still requires quite a bit of resources for big multi projects, I went up to 35-40% SPU usage with a 2ms latency – which also accounts for why the announced required setup seems to me very minimal:


Like any other Kontakt bank, it gets authorized using a serial number. Nothing difficult, but it’s always uselessly time-consuming to my taste.

It can be used for creating ambiance musics for movies and the sound is really great, the manual talks of a dramatic sound and some of them really convey emotions greatly, just go for the appropriate scale and here you are – a bit too quick perhaps. The sound is really massive, thick, heavy, impressive, and it distorts quickly if you don’t go with a limiter in the end of the FX chain.

The manual provides the following details:

2,000 sound sources, 1,000 sound presets and 750 instrument presets all ready-for-use, allowing users to work with slightly over 2,400 billion(!) different sound combinations at hand.
Sounds for each bank are divided between atmosphere, instruments and percussive sounds, with a large variety of each.

As an example, the effect page for the (aptly-named) “Cries for help” setting :


It’s easy to start working with, but nothing new except for its large variety. So it’s not hard to use, but still needs time to explore thoroughly.

As usual, the way the banks are organised (with instruments and multis) is logical and relevant.

You get some rather nice sounds that would perfectly suit a prog rock intro. Pads + guitars with delay and a bit of reverse, and the ambiance is instantly here – all within only one or two notes…

You can get more towards a sound or another.

Each sound can be modulated using effects and filters, allowing for an almost-infinite number of combinations. Those who know Korg’s WSAD will find a certain number of similarities as the WSAD allowed to use simple sounds within a performance, and for each sound the joystick could be used to point to 4 sources with the same sound being usable to be stacked within multis where the sound register could be chosen; well, here it’s almost the same, with an additional sound modulation feature – not that the WSAD couldn’t do it, but it was less powerful.
As an exemple, the sound sources can be modulated using the joystick but also another – virtual – joystick (see image below).

This is where you wish you had a hardware controller to make things easier.

The basic sound is called soundcore and features two sound sources. Up to 4 soundcores can be used for a total 8 sources – and this isn’t even multi yet!!!

An arpeggiator is also available.
http://zupimages.net/viewer.php?id=17/47/cpw9.jpg

As usual with Samplelogic, there’s a nice additional feature with the modularity of filters and all other parameters to be used with tempo-synced step sequencers. For each step, the volume (for instance) can be modulated to create gating effects, or to manage the distortion level… Everything can be assigned and parametered (which is a bit more complicated – I haven’t tried to modify anything so far)

In the end, I’d make the same choice especially considering the special price for which I bought it (a very convincing argument, indeed!). It’s a soundbank that needs exploring, tweaking… No limit, except that of one’s “image-in-a-sound”…

I’ll add below some presets of sounds and multis so that everyone can hear the kinds of sound sources that are included.

Some demos, just to give you an idea of what can be done using it:

https://soundcloud.com/sample-logic/dark-rebellion-tom-salta?in=sample-logic/sets/cinematic-guitars-infinity
Did you find this review helpful?yesno
»

Other Sample Logic other Virtual Intruments