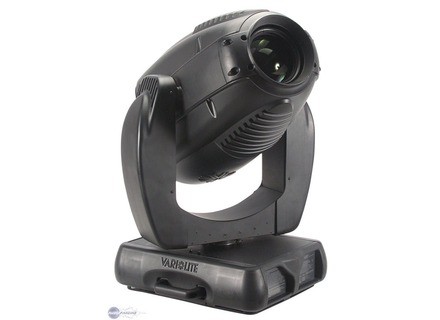 Vari-Lite VL3000 Spot
5
One roll's roll's the fantastic lumiere.cette machine is I think one of the top category with AC also for me a little for alpha equal afection 1200.
Did you find this review helpful?yesno
»

Mystic's review (This content has been automatically translated from French)

Vari-Lite VL3000 Spot
5
A great machine, I'll do a for / against to give my opinion without being too euphoric
To:
- A potato of hell, the best in brightness I saw 1200W (or so my memory playing tricks on me). It buries a MAC2000 example (comparison rating score).
- A staggering 10 Zoom 70 without deformation of gobos and keeping the net much of the race. It opens a lot of new effects like gobo tunnel is opened and the zoom ...
- MODR Weight (38kg) but poorly equilibrated (all in the head so it switches that direct ds lift gaffe if not)
- Beautiful color and good color mixing.
Cons:
- The Price (must say it cost an arm and a leg machine like that).
- The basic gobos are quite limited, must love project on cyclists because There's no volumtrique gobo (or tunnel style claypaky circle points).
- The lyre is not super fast but good in dplacements is not asking too much either. The movements have a phase acclration ASEZ brand. If only Vari-Lite VL3000 was an S-scan I would be the happiest in the world
- The doc is a book on CD in the box for the price they could at least have put a paper copy in the box.
Hop and a picture of the machine out of the box:


ps: it's almost the pub but if you want to rent in southern France, there is no evil in Panpot, brand new