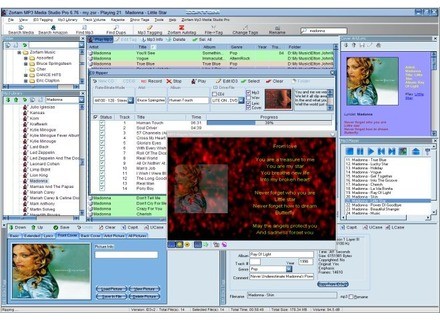 Zortam Mp3 Media Studio
5
Zortam MP3 Studio is a software that is used to convert mp3 to wav file formats. I purchased this software just recently so I can have it on my laptop. I got it for 15 bucks online which is a very fair price for a piece of software that I needed to have do to the file format differences with so many applications. I have always had issues with getting cd’s in to mp3 format. I don’t know why they make cd’s some weird format that most programs don’t read anymore. Back when I was using cool edit pro about 12 years ago, it could rip right off of a cd and import right in the play list and then you could export it out in any format that you wanted, I have a lot of issues doing this with most of my DAW’s today. Zortam MP3 Studio was very similar to audacity to me for some reason. Not the way that it looks, because they look completely different but the way that it operates and how simple the program is to get what you need out of it.

Installing it was very quick, I download it only for my windows 7 pc. I don’t think it works on mac platforms though at least it didn’t say that it did on the website so I assume trying it would be a waste when there is no download link for a mac version. When using it, you will need to update your computers drivers if you haven't already done that. This is critical to get this software to work correctly in its configuration.

Overall, there are a few mp3 coders that I would choose before this one. But I was on the road and didn’t have mine with me so I needed one fast. So I purchased this cheap one for 15 dollars and none the less it works great and I have no issues with it.

Zortam Mp3 Media Studio
4
I've had Zortam MP3 Media Studio for about two years. I got it with the music production bundle, otherwise I probably wouldn't have bought it simply because you can make mp3s in iTunes and a number of other freeware programs. This being said, this is easy to use and will do the job. It is also nice to be able to bounce straight to mp3 from my daw. It is also quite convenient to be able to set the ID tags right while you are making an mp3. Acomplaint about this is that rather than just making it an mp3 export, it would be nice to be able to export any type of audio file I want. I think that would make this software more useful and more worth paying for. This software is unique to fl studio and most other sequencers will have an mp3 export built into the program, so I can't think of anything to compare this to. The price isn't anything to quiver about as it is quite cheap, but if I am going to buy something I feel I should be getting more than this. I seems to me as if they are trying to make a quick extra buck on people by not including this in the daw softwares on the market. This being said, the program does do what it claims and it does it well, I just have other free options that I make mp3s in and do not think that I would have bought this had it not come in a bundle. This program does have a free option though, but im sure its not as many features as the paid option. But there are other softwares on the market that are completely free that can do what this does without a problem. Overall, its not bad.. Give it a shot.

Zortam Mp3 Media Studio
4
Zortam's Mp3 Media Studio is a free piece of mp3 converting and tagging software. Zortam has this free version of the Mp3 Media Studio and also sells different mp3 components. Within this free software, you're able to rip CD's, convert to mp3 or WAV and vice versa, mp3 tagging, and normalization as well. It's pretty easy to use software as I've been using it to organize one of our libraries for a music publishing company that I work for. This isn't the main software that I use to organize our library, but it's still useful and I do end up using it a good amount. I don't know the exact compatibility of this software, but I'm currently running it on a PC system. The computer is a Fujitsu LifeBook C1320D Notebook that has a 2.0 Ghz processor and just a GB of RAM. Of course this isn't the quickest computer, but it's enough to get the job for running this software. Converting files isn't the quickest in Zortam, but this probably has more to do with the computer you're running it on than anything else. It's definitely nice to have all of these features in one spot for organizing your mp3 library. You can find free versions of software for everything that can get done in this, but I don't know of too many other free pieces of software that offer up everything in one place like Zortam does. The Mp3 Media Studio is available right from Zortam's website, but make sure you get the studio version and not the pro as it'll cost you some money, as will the other pieces of software that they've got. I can't speak to how the other versions of Zortam work, but as for the free Mp3 Media Studio, it's definitely worth checking out.