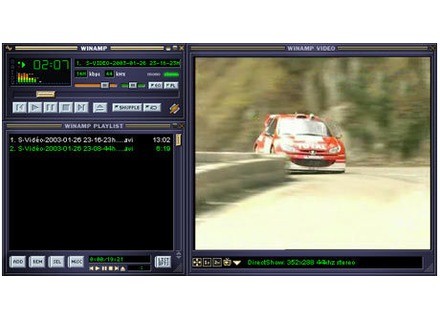 Nullsoft Winamp Classic 2.95 Full
4
Nullsoft's Winamp Classic 2.95 is a media player that was one of the first of it's kind. I don't have Winamp any more since I don't use a PC for listening to music. I did used to use it before I switched over to iTunes like most people a while back. I do know people who still use Winamp as their main audio player, and it's definitely a viable option although I haven't used it in a while. It's free for the full version and I believe that they're up to Winamp 5. There is a pro version that costs a small amount of money, although I'm not really sure what the perks of getting it are. I personally haven't used the newest versions of Winamp, as I've only used up to 2.95. It shouldn't make too much of a difference as having the new versions can only be better, although the interfaces and general design to appear to be pretty similar. The best part about Winamp is that you can play virtually any kind of audio file, making it perfect for audiophiles who have files of all types to listen to. ITunes supports a good amount of file types, but there are definitely some types that it doesn't that are indeed covered with Winamp. In addition to audio files, it also plays videos and hosts a wide variety of features both comparable to iTunes and some that aren't found there. If you're at all thinking checking out a new (or a first) general media player for your Windows based PC, this is definitely worth trying out as it's free anyway. Of course I wouldn't go searching for 2.95 as I'm sure the newest available is better than this one. There are definitely options out there for media and audio players beyond iTunes, so go ahead and try Winamp for yourself.
Did you find this review helpful?yesno
»