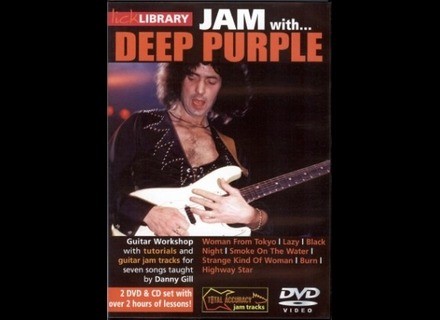 All of these DVDs are taught by former Joe Satriani pupil, Danny Gill.

Ritchie Blackmore, a founder member of Deep Purple and Rainbow, is widely regarded as one of the guitar greats, LL says.

Jam with Deep Purple (RRP £27.99) is a double DVD set with an accompanying CD of tracks without the guitar so you can jam along as you learn. In the two hours of guitar lessons, Danny walks you through seven classic Deep Purple tracks, "Woman From Tokyo," "Lazy," "Black Night," "Smoke on the Water," "Strange Kind Of Woman," "Burn," and "Highway Star." The backing tracks are featured on the jam-along CD recoded with a backing band.

Learn to Play Deep Purple (RRP £23.99) is a two-hour DVD lesson that takes you through five Deep Purple tracks. In this DVD, Danny take a more in-depth look at these tracks covering techniques such as bending, picking, and key changes. He also discusses open string licks, use of the tremolo bar, and how Ritchie plays those staccato notes.

Ritchie Blackmore The Solos (RRP £23.99) has Danny taking you through the solos of "Since You’ve Been Gone," "Smoke On The Water," "Man On The Silver Mountain," "Highway Star," and "Burn." Each solo is played up to tempo, at a slow tempo, and then at a medium tempo. The CD has fifteen backing tracks, one at each tempo for each solo featured on in the Guitar DVD lessons.

Quick Licks in the Style of Ritchie Blackmore (RRP £19.99) features over 30 licks reminiscent of Deep Purple’s "Burn." As Danny looks at each Ritchie Blackmore “flavored” lick, he explains why the idea works at that particular point in the backing track. Danny also takes time for a more in-depth look at scales and rhythm and use of a slide.

Lick Library guitar DVD lessons are filmed in high definition and include the  Lick Library trademark double-screen so you can see what both hands are doing at the same time.