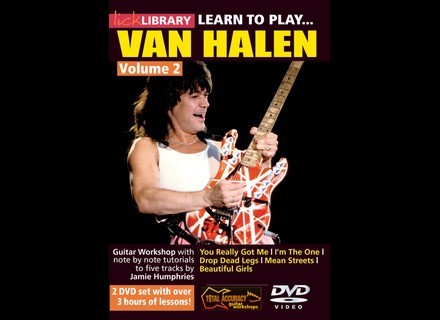 Find it in the classifieds starting at $50 Avg used price: $50

The DVD is presented by Jamie Humphries who specializes in all things rock and is renowned for his transcriptions and backing tracks.

Learn To Play Van Halen Vol 2 (RRP £24.99) – features the Van Halen version of the Kinks classic You Really Got Me from their debut album. This track was responsible for jump starting Van Halen’s career. Also taken from this album is I’m The One. Jamie then moves to Van Halen’s second album and takes a look at the concert staple Beautiful Girls. Their fourth album is regarded by many as their best and the DVD guitar lesson looks at the opening track Mean Streets. Finally you can study Drop Dead Legs from Van Halen’s most popular sixth album MCMLXXXIV (1984).

As you look at each track with Jamie, he will break it down into small manageable pieces, playing it slowly, then up’ing the tempo to a medium one before playing it up to tempo. All the time, because it is a Lick Library guitar lesson, you can see what both of Jamie’s hands are doing with the familiar split screen. Jamie talks you through the techniques needed to nail that two handed tapping so indicative of Eddie Van Halen’s guitar playing, and get that Van Halen feel in your playing.

To find out more about Learn To Play Van Halen Volume 2 visit www.licklibrary.com.