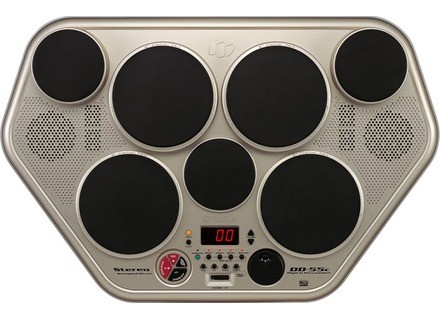 Yamaha DD-55
5
I contributed to this as a christmas present from Sound Control for 121 of your english pounds. A VERY good deal seeing as the RRP is often quoted as £199. I got it because I am now in Uni, and can't take my 8-piece Premier Kit with me.

Where do I start? Well, right from the word 'go' everything is customisable. The touch sensitivity of the pads, the voices of the pads, the reverb. It isn't as heavy as I feared, and the pads are quite similar to drums themselves. There are hundreds of voices, every one of which can be assigned to different pads/pedals and the stereo speakers work very well. It also has MIDI, which means you can connect it to a computer/keyboard etc. When using it with a midi you can turn the speakers off, so that you don't get any double notes. CONTRARY TO POULAR OPINION, THE HI-HAT PAD CAN BE MOVED TO ANY ONE OF THE PADS, just make sure you assign the foot pedal to the same voice.

Ok, so it's no set of V-drums. But then I Couldn't fit that in my student digs anyway. (and the fact i didn't have £1500 to spend also swayed my dersicion!) It also isn't a real drum kit, so don't use it for gigs folks!
Sometimes, if you set the kit to it's most sensitive, it'll play two voices when you hit one pad.

Very sturdy construction, the pedals maybe are a little buit light, sometimes they skid around on wooded floors. Other than that, top class!

It's by far the best of all the 'practise' kits and would work well in an acoustic kit (where do you think mine will be going when I'm at home!?) and by itself for small events like tiny church services, or soething.

Yamaha DD-55
4
I purchased the unit from Grandma's Sound in Albuquerque, NM. I paid $199 and it came with a power supply.

The DD 55 has a ton of features. The unit holds many "standard" kit setups for use right out of the box. You can also design your own kit with the hundreds of voices.

The good stuff pretty much stops there. The pads are not positioned like a true drum set. The hi hat is the center pad, and the snare is the lower left pad. The pedals are a piece of whimpy plasitc with a tiny button in the ceneter of it. After about 2 monts of playing the bass pedal finally gave out. On a minor note, the pads also mark your sticks up with a black film that gets onto other sets. The quality of the voices is ok, but they aren't quite right. The hi hats are the most noticible.

The construction is great except for the pedals.

Buy this unit if you are just starting or want something to practice with. If you plan to play with a band DO NOT get this. You will be laughed off the stage.

Yamaha DD-55
3
Purchased from ZZounds.com for $250 + shipping March 2003. I chose this unit because it had the most drum pads available short of a full electronic stage kit, which I didn't have room or money for.

The DD55 works well as a stand-alone unit. The drum pad sensitivity is fairly expressive, perhaps a bit too much so. The pads are very sensitive to not only velocity, but also how centered your hits are. The small onboard speakers sound rather disappointing, but the unit sounds much better played through good headphones or an external amp and big speakers.

The MIDI controller functionality is nearly nonfunctional: the pads are supposed to be independently programmable for MIDI note output, and to have a memory that saves the one allowed custom drum kit. Neither of these functions appears to work. The DD55's onboard interface is very poor, the onboard MIDI note programming info does not correspond to its output, the method for searching MIDI motes is poor and time-consuming, programming one pad alters the programming of other programmed pads for some reason, and the memory does not consistently maintain your settings. The DD55's MIDI wouldn't send or receive at all on a fully-functioning SBLive soundcard, even though both the SBLive and the DD55 worked with other MIDI instruments and modules, some of which worked with both the SBLive and the DD55. I was not able to find the source of this problem, but the DD55 does transmit and receive on an Audiophile 2496 card.

The unit is reasonable for light use, but likely wouldn't withstand heavy hammering. Another complaint would be that the smaller "cymbal" pads should all be along the top, with the larger pads along the bottom, more like real drum sets. People totally new to drumming won't notice these shortcomings so much, but those used to real stage kits will quickly be disappointed, because many types of common hits can't be done because of the arrangement of the pads. The arrangement of pads also seems a bit cramped; it would benefit from a couple more inches between all.

The unit does well as a standalone unit if used with headphones or an external amp+speakers, but the MIDI functinality is a near-disaster. No instrument profiles I could find allowed the DD55 to function as normal as a MIDI controller on my computer. The only way I can use it as a controller is to simply record whatever MIDI data it puts out when played, and then edit the MIDI files in PC software after recording to put the signals into the right notes. It's disappointing because there really isn't anything else currently competing with the DD55 now, you can either spend a lot less and get only four pads, or spend a lot more for a stage-level instrument.

Yamaha DD-55
4
Argos (uk) 160 pounds-bargain!
I wanted to drum in the most confined space and not disturb the family or neighboors.

The presentation and layout, the acoustic feel it had and the easy to work controls maybe referring to the manual sometimes but that's what it's there for.
An authentic sound and playing on this and a set of drums don't make a difference really. Easy storage tuck under the bed or in a cupboard. General MIDI compatible.

The Hi hat mas in the centre. and the excessive noise made when hitting the drums,
knocking against the unit. The dial was a bit annoying to use. It hasn't got a tutor on it, pedals were a bit strange to use

Stable, can take lots of punishment and manical drumming (Keith Moon style). Very compact I mean compact no kidding, my house is tiny and there's stil space for it. Quality is good, well built. The feel of the pads as well eg. the floor tom pad is bouncier than the snare.

Recommendable to anyone even the serious drummer, good for jamming with the band

Did you find this review helpful?yesno
»
Read the 10 user reviews on the Yamaha DD-55 »