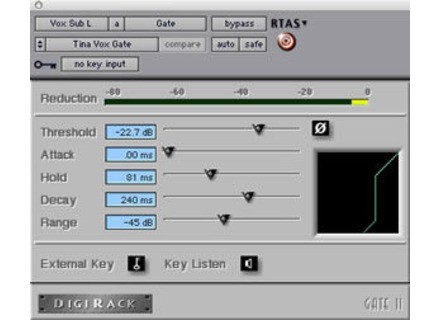 All user reviews for the Digidesign DigiRack Gate

Digidesign DigiRack Gate
4
Digidesign's DigiRack Gate (II) is a free plug-in that comes with all version of Pro Tools. You don't have to do anything to install the plug-in once you've installed Pro Tools, as it will already be good to go and can be used as either a plug-in or in the audio suite for one time processing. The interface of the plug-in is pretty plain looking, as it has been virtually unchanged throughout the different versions of Pro Tools. This isn't a bad thing at all, as it allows new users to get accustomed to using it quickly and without having to deal with a convoluted interface. In general I prefer plug-ins like this where there isn't too much thinking involved as I'd like them to make it as easy as possible for me to use the plug-in at all times. In terms of the parameters that can be found in the DigiRack Gate plug-in, it's got sliders for threshold, attack, hold, decay, and range. If this is your first time using a gate, it will definitely take you a little while to get used to using a gate in general, but learning it on the DigiRack Gate is definitely the easiest way to do so. I don't believe that they make manuals for the DigiRack plug-ins unless the instructions are somewhere in the Pro Tools manual.

I'm currently running the latest version of the Digidesign DigiRack Gate plug-in in Pro Tools 8. Which version of this plug-in you've got only depends on which version of Pro Tools you've got. I'm not sure if it is possible to upgrade the plug-in without upgrading Pro Tools. I run this plug-in and Pro Tools LE 8 on a Mac Book Pro that has a 2.2 Ghz Intel Core 2 Duo processor and 4 GB of RAM. I run Pro Tools with a Digi 002R audio interface or a Digidesign Micro Box if I'm working on the go. I haven't ever had too many instances of this plug-in up and running at the same time, so I can't say that I've really tested the plug-ins performance, but in my usage of the plug-in it hasn't been taxing on my system at all.

I can't complain too much about the Digidesign DigiRack Gate as it is a very useful plug-in that comes free with Pro Tools. It isn't the most in depth gate that I've seen, but this is truly all that you need to get the job done most of the time anyway. If you are running any version of Pro Tools and need a gate, I'd highly encourage you to check out the DigiRack Gate before looking elsewhere to spend money...
Did you find this review helpful?yesno
Cookies help us improve performance, enhance user experience and deliver our services. By using our services, you agree to our use of cookies. Find out more.