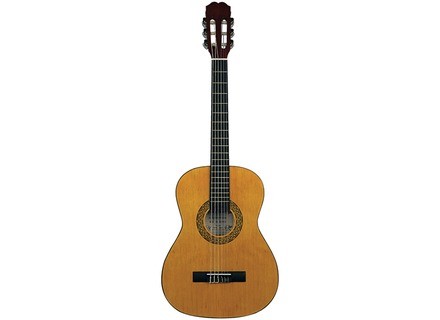 I deliberately leaden note on features because it is the first prize, made the chain over evil and its really suffers!

First prize for a guitar, the neck is quite nice to play, it is a classical guitar, very light. No adjustments to make, it's "Plug & Play" but without the "Plug" ...

His classical guitar, nylon strings. Ideal for play classical, flamenco, music medieval music but CERTAINLY NOT pop / folk radio! I do not say it sounds nothing but render unto Caesar what is Caesar, the sound is warm round of the classical guitar gives you a sound unpleasant on contemporary music.
After that, it is far from his classical guitar or an Esteve Pappalardo.
However, it much like tuning (rare for a classical guitar) and maintains its accuracy over time (even more rare guitar first prize, very low end).

I use it since 2010 to teach in the evenings and fire-de-camps or watered ... in short, this is a guitar that sounds right and cheap (so I understand the spell without scratching or even to explode).

I try many classic models, all brands, almost all "people" better, are more enjoyable to play.

-:
* Its really not terrible
* Although quite fun to play, there is plenty more
* The finishing is poor (coarse collage where the glue is apparent pixelated rose print ...)

I recommend this guitar for beginners wishing to start ONLY guitar cheaply with an instrument that sounds when even just those OR / those who do not want a guitar to sound but for evenings o7u is not afraid to see guitar go under a truck (it hurts less a guitar exploded 65 € a 650 € guitar ...)