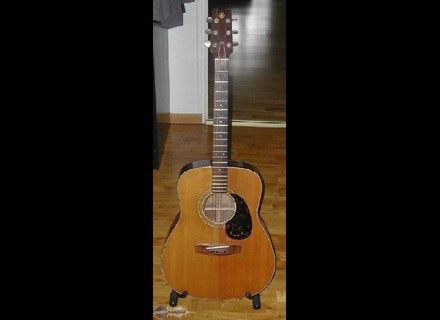 FG-160, Other Acoustic Guitar from Yamaha in the FG series.

View other reviews for this product:
Guitar 1970

Solid mahogany, among other

The handle is rather round.

Its magic in all cases!

Least one small: do not Burin wildly, he needs the gentle subtlety.

Catte folk has a magical sound
Warm, bright, loud and clear
Well defined in the bass and treble in the crystalline

Magnificent as arpeggio riffs or rhythmic
She also loves the blues

With that, you can do whatever you want!

All those who have played or heard remained glued and tried (unsuccessfully) to buy me, starting with my guitar teacher ...

This is my first guitar, which helped me to learn, it's been 12 years that I have, so it is older than me.

I did realize later that this guitar is a gem.
It was a terrible stroke of luck, since I did not play, I bought it (eyes closed) Used (250F) to a man who wanted to get rid of it, other folks also sold, but more expensive ...

What I like most is the sound, which has a huge fascination about the non-musicians as the musicians.

I have since tried other folk, but found no equivalent, but I did not try to high-end folk.

The price / quality ratio is unbeatable!

Today, I would do this choice with his eyes closed, it's a great guitar and it sounds better and better with time.
I can not imagine one day part with it, I would kill myself the one who steals or breaks mela!

If you find one, please
See the source
Did you find this review helpful?yesno
Cookies help us improve performance, enhance user experience and deliver our services. By using our services, you agree to our use of cookies. Find out more.