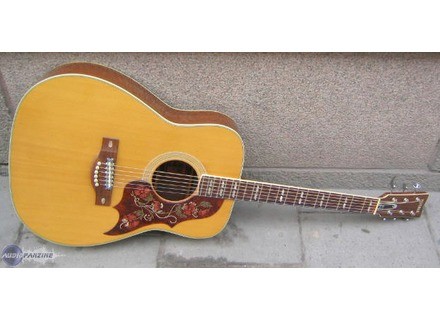 FG-300, Other Acoustic Guitar from Yamaha in the FG series.

Yamaha FG-300
5
I am foremost a percussionist/drummer. I have played for 39 years, hitting the 40th this year in '08!I also am an accomplished vocalist (so they say), but took that up only in the last 15 years. Starting playing acoustic in 1989 and haven't turned back. I have been doing coffee houses and lounges for many years now. I am not so much a virtuso guitar player as I am a 'song-singer'. I have learned many songs by many artists and my repertoire is somewhere near 340 songs now! The list is huge, but here are some of my favourites: The Eagles, The Beatles, Neil Young, The Tragically Hip, James Taylor, Willie Nelson, Green Day, Steve Miller, Chilliwack, The Rolling Stones, Oasis, Coldplay....
My favourites as a drummer are much more focused on playing and I grew up learning many challenging parts, courtesy of these bands and drummers:Rush,Styx,Pat Travers Band, Boston, Black Sabbath, Jimi Hendrix, The Who, Led Zepplin, Steve Morse, Toto.....

My sister got a brand new FG 300 in 1971 as it was for her 13th birthday. She played it everywhere and for many years before I borrowed it. That was 18 years ago! I love it, have grown as a performer because of the comfort of this fine acoustic and the ease to play it. I know it is overdue for me to buy a brand new guitar, but it will be a sad day to pass it back.
N.B. She hasn't missed it as she is a first class pianist herself and guitar was her early stepping stone.
Jim Ljungh
Canada

Not much. The strings sometimes end of riding against the nuts on the bridge screws,instead of in the groove, but you just have to catch it on installation of the new string and it isn't an issue.

The neck is the most appealing thing to me as it is so playable. I haven't found a more comfortable fit for me, though I know they are out there.

I think I have made my opinion of this instrument through many sections of this review. I love it! It stays in tune ALL THE TIME as well!

Yamaha FG-300
5
In 1978 I purchased a Gibson Maurauder,which was a Les Paul solid mahogany body and a Flying V neck. I paid $375.00 for it and $280 for a Crate 60 watt amp when they were first put out they were in a crate type box.I was not satisfied with the sound or playability. I was looking to sell it, but one day I was in a local music store where I had shopped since I started learning guitar. Mr. Jones of Jones Potts music Co. . had sold a fella that played Bluegrass a new Martin and was in to pick it up.I ended up walking out with his old Yamaha FG-300,a Di-armond pick-up for Acoustic guitar,a Shure PE588 mic,mic stand,a new Chromatic Hohner Harmonica,picks and a peg winder and a music book (Bluegrass Greats).I wouldn't trade my Yamaha for any guitar or amount of money.

I have played many types and brands of acoustic's and in price from cheap to 1000's of dollars and mine plays as Good as some of the most expensive made and I have made cheap guitars sound as good as mine so I rate it right up there with the Big Boys.

Not much bad about my FG-300,it does not like extreme cold weather.Or any high moisture areas. Don't know much else that is a draw back of any kind.

I am impressed with the construction of this guitar.It was a true craftsman who did this work. I am disabled now,but was in the construction industry and this wood work is awesome. I had left my guitar over at a friends house and they had baseboard heat and my case was against the wall.It had melted the case to the point it was drooping .It was 15-20 degrees outside and I carried it out and laid it on the deck.When it was cool enuff to touch I carried it in tuned it and it was not hurt at all.

As my effort to catalog my works of music come closer since my disability in Nov. 2001 I am working on my two CD debut CD's instead of one. Each will complement the other. My Yamaha FG-300 has been there and always will be my primary instrument,I am in the market for an old Tele-Caster that has been there and done it ,once or a thousand times.My wife owns a Squier Tele-copy, Torino red (Muddy Waters) style. My son 14 got his first electric this year ,a Squier Bullet Black-on-Black and its awesome.Plays good and thats what counts.

Faucotous's review (This content has been automatically translated from French)

Yamaha FG-300
Years of Manufacture: 1968-1976
Price (1968): 365 USD
Top: Spruce
Back / Sides: Rosewood
Neck: Mahogany
Key / Bridge: Rosewood
The fabrication was done in Japan and the color of the label (white or red) is a point widely discussed on the net. In fact, this color does not matter and has varied over time without translating any difference in material or manufacturing site (according to Yamaha).

The handle is extremely pleasant and very comfortable instrument to play. The instrument is well balanced by weight and the body lightly.
You can not get a bad sound!
The bridge is adjustable and a specialist easily optimize the harmonic richness.

One can easily get her very hot even in the acute, depending on the attack. Perfect for picking folk.
The instrument is very high sound quality. I have personally never been a better hands, including top brands American folk guitars.
It is powerful. His grave is very clear and not oily at all.
General impression of softness and strength.

I use my 300 FG for 40 years! Always with the same pleasure and even wonderment, especially with new ropes and shallow draft that make her the hottest.
I have in the hands of many very good guitars (1500 to 2000 €): I would not trade my 300 FG against any: I love the richness and warmth of its sound.
I also love his balance and comfort of the handle: bass strings that do not curl. In 40 years, the handle did not move! In fact, nothing has moved a slight separation of the local protection fund.
I only play the picking and do not know if the game is enjoyable mediator.
Watson fans and other masters, treat you with the FG 300.
The value for money, then and now even more (if you find one) is excellent for less than € 1,000 you can own an instrument that you no longer separate.

Other Yamaha other Acoustic Guitars