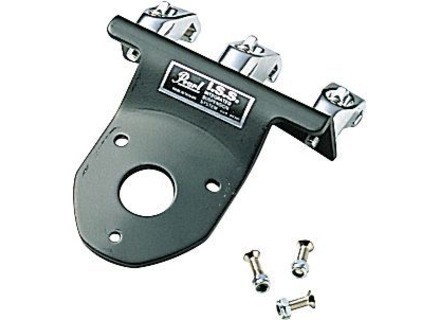 Pearl ISS Mounting System
5
The Pearl ISS Mounting System is a nifty little device that's designed for suspending your drums, with ISS standing for Integrated Suspension System. I recently did a session at the studio where I work where the drummer brought in his own drums and had these mounts for his tom tom drums. This will actually affect the way your drum sounds a bit, as having it mounted in this fashion will make it possible for the drum to sound out to it's full capacity. I didn't have the time to hear the drums with these both on and off, but it definitely makes sense that it's going to help with the resonance and sustain of your drums since they'll be placed how they ideally should be. I don't know all of the backing information on the Pearl ISS Mounting System in terms of all the different sizes that they make, but the ones that the drummer brought in for the session were just for his tom tom drums, ranging from about 12" to 16". Since I don't own drums with these on them, I also can't really speak to how easy or hard these are to put on. I did ask the drummer on the session and he said he's never had any problems with it at all. The Pearl ISS Mounting System mounts should be cheap enough where it's at least worth checking out or trying out to see if it makes a difference and/or is worth it for you. I do know that Pearl has other mounts of a similar kind as well, so definitely do the full research on what's out there before buying. Having said this, the Pearl ISS Mounting System seems to be a very solid idea for suspending your drums so they resonant to full capacity.
Did you find this review helpful?yesno
»

Other Pearl other Drum & Percussion Hardware