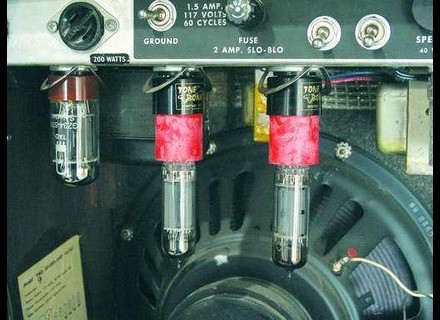 Pascaloo!'s review (This content has been automatically translated from French)

TAD (Tube Amp Doctor) Tone Bone TB-PH/2
3
Accessory for reducing the power of your tube amp if you find it too powerful (it happens very often!).
The Tone Bones are supplied with each EL84, and settled in the place of the original power tubes of your amp.
For example you have an amp with 2 6L6 EL34 or 2: you exchange them by 2 Tone Bones with EL84 and their miracle, the power from 50 watts to only 8 watts (for Tone Bones triode version as they are available in pentode and in this case the power is 15 watts). Another example with a 100 watt amp with 4 EL34 or 6L6 you need 4 Tone Bones triode and you get 16 watts (or 30 watts in pentode version).

It makes a big reduction in power do you think? well read on.

Very easy: you remove the original tubes and installing the Tone Bones instead and then the EL84 in Tone Bones.
It takes less time than it takes to write!

Well obviously there's typically becomes EL84 is to say a little darker than the 6L6.

But the surprise is the power because I can tell you that 8 watts of a good tube amp that blows in a good style HP Celestion or Jensen and well it is not much less powerful than 50 watts! So it's a little disappointing, I expected to do my old Super Reverb cruncher but it's not really the case, unless you play very hard on a big stage.
Let's say the volume before I got to 2, is 3 now!