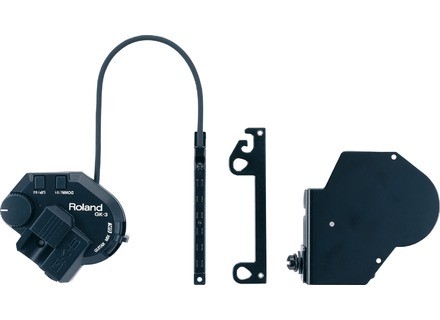 GK-3, Other guitar pickup from Roland in the GK series.

View all offers for Roland GK-3 »

Royalclik's review (This content has been automatically translated from French)

Roland GK-3
4
Premire print out of the box, OR are 30% less in size (selling of Roland), me is the gk 2a I can tell you that I still wonder, no seriously it is actually smaller but a little while. Yet he could have, it sounds hollow the dedant see even a little cheap.
Finally, a cavity, back, straps and thus shorten the cable that goes to the micro (the series are GK microphones or pickup, but not MIDI sensors).
OK, the knob, and finally a real knob flexible and fast, nothing to do with GK2, assignable buttons up / down, no complaints.
In the box a variety of screws, rubber, foam, double sided, holds, the system mounting gk on the table and the system of fixing the microphone on the bridge.
That's good, it's also why he is compared to gk2a interresting, and that's why I bought it.
Ben strip of metal that is a very good ide but not great! attention once it's Mount and the strings are stretched, it's going, but the holes that keeps it on the screws of the bridge are too big, moral ds you change your strings, ca fleet, the micro moves under the bridge and it takes place each time the prcisement.
Prcisement is the word, Do not hesitate to try Redemont, installation is simple but requires a lot of detail.
for me, a dcrochage a vg 88 or latency on a synth guitar, just l. 1mm micro strings, if not ...
Another great thing about this sensor, the possibility to rgler, via a micro screw in the center of the micro, the author of the central terminals of the microphone, allowing rapporcher or moves away from the terminals D and G strings .
Why not do this for all the strings, rather than to take the lead with shims and scotches !!!!????
Finally, the price softens dies there's no mail order!
I put 8 it works wonderfully on a strat-type guitar is super simple to install and not have to make holes, and others who have small screws Diameter to support the bridge, it's going It moves but when you change your strings, too bad.
It could have been smaller ...

kjoline's review (This content has been automatically translated from French)

Roland GK-3
5
I use the 15 days since GK3.
Installation on my Epiphone Les Paul Custom with no points.
(Using the Stand spcial Les Paul. We must get out the ropes is a bit heavy but good! It quickly scotch and holes! Time used about 1 hour)
Price is not abus115 euros).
There on the sensor buttons for controlling the converter (GI20 for me). It's quite convenient.
Bliss.
But be careful though to adjust the spacing of the micro and string!

Go to your eyes closed!

vincejack's review (This content has been automatically translated from French)" Everything but the look!"

Roland GK-3
5
Purchased a few months to complete a Roland GR55, it works very well. the look is still ugly, but hey, question response times, the GK3 is super efficient.
Installation is "relatively" simple. For my part I had cut my plate strat 2mm to win that I missed to move the sensor under the strings, keeping a low action. I used shims supplied with the sensor. It is very well equipped on that side, the kit is complete and you can adjust the height of the sensor accurately (there are also screw on the sensor to adapt it to the radius of the scratch).
to fix the microphone, you can opt for direct screw in the body or paste, no significant difference (I had heard of feedback effects ...). An important point: with the GR55, one can reverse direction of the sensor, and thus have the wire side and non-acute Mi Mi serious. It's just great for those that over-thick sensor discomfort in the game at the right hand. However, a strat if you opt for the mounting direction, it will stick the sensor, because the screw located below the start of the thread falls into the empty (trapping for electronics). Fixing the case with the decision is simple, no problem.
The quality of the tracking is excellent, the response time almost perfect, but it is also linked to many factors other than the sensor alone: ​​a well tuned guitar (action, intonation), the converter parameters (space bridges with sensor, tuning the guitar ... etc), and precision of the game (it will not play on the handle of Rhodes as a guitarist ...).
I would definitely do it again this choice, competition is not large, and much more expensive (see Graph Tech)

christofer.oldz's review (This content has been automatically translated from French)

Roland GK-3
5
Mounted on a gibson les paul studio, I installed it in less than thirty minutes.

Just put it directly below the bridge, removing the strings and the bridge, we set the sensor is reset and the bridge over the ropes. Finally, we regulate the height of the sensor quickly and it's good!
result my guitar is intact I can remove the GK3 if I want without the instrument to be drilled or dirtied by adhesives! and the sensor works very well.
on the other hand, some guitars may need to resort to adhesives provided with the apparatus of the type of bridge of the instrument ...

Roland GK-3 manuals and other files

Other Roland other guitar pickups