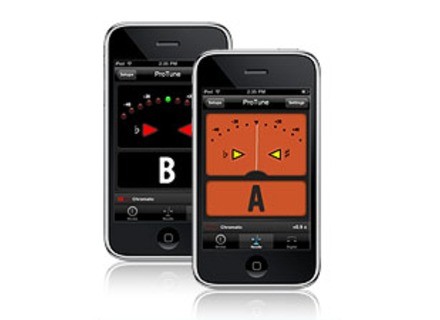 Planet Waves ProTune
4
This is a tuner application for the Iphone. They really do have an app for everything! This is a really simple app to install on an Iphone or Ipod touch. The fact is, there isn't much music software that's easier to install. There isn't much hardware that is necessary outside of the Iphone's internal microphone. Although the software is advertised to users of both the Iphone and Ipod touch, the hands down advantage goes to the Iphone, considering that you can use the built-in mic from that machine to tune your instrument. The functions are easily accessible, as you just have to open the app and select your settings.

The software has never given me any problems. There is an option of choosing guitar, bass, violin, banjo, and other stringed instruments, in order to highlight the specific frequencies that are necessary. I've never had a problem with latency or other issues, and the built-in Iphone mic is surprisingly capable of handling this feat. This is assuming that the room you are in isn't loud, which is a problem for any built-in microphone based tuner.

While this is a pretty awesome application, I think that it's basically a little too late for most musicians to settle for it. For one thing, using it in a loud room or a gig situation is a pain, simply because the built-in mic is too weak to pick up the instruments. If you are going to use it simply at home, with an acoustic instrument (or a plugged in electric one), it's probably worth it. Especially if you lose the tuner you already had, which is what happened to me. Overall, this is a surprisingly useful Iphone app for those moments where finding a tuner is going to be more trouble than it's worth.
Did you find this review helpful?yesno
»

Published on 01/18/11
Planet Waves is cutting prices for its iPhone applications in 2011.