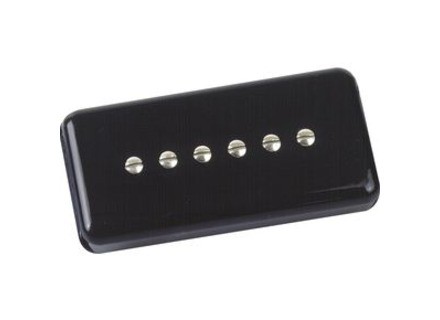 Gibson P-90 Soapbar
5
For about 10 years before the PAF came out the P-90 was Gibson main pickup. They are single coils with a larger chassis than most single coils. Even though humbuckers were still around Gibson was putting these in their lower end guitars up until the mid 70s. If you went to buy a low end Gibson back in the 60s you would probably end up with something with P-90 pickups. These pickups typically have an output of 7k but the way they deliver this output is what makes them great. They have a mix of single coil twang with the smoothness of a PAF. Its like a crispy humbucker. The PAF has a more refined and sofisticated sound since it came out 10 years later but the raw sound of the P-90 is something special. Not many vintage hardware pieces have been able to stay useful for so many decades. In the early days these were used for jazz and from the 60s onwards people used them to get great hard rock and early metal tones. Tony Iommi used P-90s for decades and all the classic WHO tunes were done with a P-90 SG special. In that era you do not get much heavier than that. They have a really aggressive tone and delivery more so than that of a PAF. Many of the heaviest records of the time were done on P-90 guitars. An SG with a set of P-90s and a bit of gain is classic rock heaven. The grit and tone from these pickups are something you would not expect from a vintage piece of hardware. Because of their unique size many people do not retrofit these into their guitars. Most guitars that have P-90s came with them. So there is not much of an aftermarket for them unless they are replacing worn out examples in vintage guitars.

Gibson P-90 Soapbar
5
This is the original Gibson go-to pickup, that they put in all of their electric guitars until the humbucker replaced it in 1957. Because of this, most people do not associate this pickup with the sound of a Les Paul when they hear it. However, it does have a really interesting quality. Being a larger pickup, it looks like a humbucker, but is actually single coil. It really doesn't come close to the sound of a Strat or Tele pickup, though, as it's not nearly as bright or shrill as those can be (I love those pickups by the way, that's not a diss).
The interesting thing about these pickups is that while they lack the brute force of a humbucker, and are obviously noisier, they quite possibly work better for lighter rock situations than a humbucker would, especially in a Les Paul. While you can't rock out like Slash from Guns n' Roses does, you can get a nice Free/Bad Company/Thin Lizzy style sound with these pickups and the right amplifier (most likely a Marshall or something similar). This is with distortion, of course. A clean sound with these pickups will quite honestly sound fantastic in the right amp. With a Fender twin, these pickups can give you a great smooth tone that still cuts through a mix and comes right out front.
The original Gibson pickups are hard to get a hold of, but Seymour Duncan makes replicas that are virtually identical. They sound pretty much exactly the same, and only cost about 70 dollars, so it's not exactly a bank-breaking purchase. It can make a nice alternative to the standard Fender-style single-coils, or a respite from the enormous sound of humbuckers. While they really aren't for everybody, I do recommend that most people check them out.

Trantor's review (This content has been automatically translated from French)" He does everything well, it's his fault ..."

Gibson P-90 Soapbar
4
Micro I had in OE on my SG Special. What is with this mic is that it is the same team that in all P90 guitars in Gibson Les Paul is the 56 Antique Gold 5000 euros to the SG Special Tribute to 600 euros. This means the trust Gibson in this model.

On the SG compared to other P90, it is good everywhere. Without hesitation, it outperforms microphones mounted first guitar a little cheaper, like Epiphone or Vintage. Compared to P77 Custom 77, I'm a little more mixed. It is on a par in the Rock, being less aggressive but wider than the P77, which really shows when "we go inside."

The P90 does not differ in anything, while micro "shops" stand out and excel in a genre, but are lagging behind in others. We find the P90 Gibson guitars jazz, blues on guitars, and the SG Peter Townsend of the Who. It casts a wide net.

For my part, I finally opted for Jason Lollars pickups, which in a rock / blues crunchy register are more detailed with a rocky side magnified compared to Gisbon.

In short, original, they are excellent microphones, often snubbed. A change only if you have a style of play quite well off and the "boutique" created the microphone. Otherwise, keep. To upgrade an Epiphone is a change to consider, with the knobs.