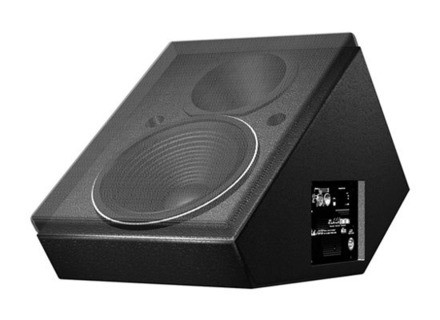 Meyer Sound UM-1P
5
The Meyer Sound UM-1P is a stage monitor for live shows, designed to give the musicians on stage a proper sound to hear everything with. I'm usually not a live sound guy, but the studio that I work at recently had a show with a bunch of bands and the PA we were using had these as stage monitors. Meyer calls these monitors 'Narrow Coverage' stage monitors, I guess because they're best to place in a certain area for a certain section of a band or a single musician to have. While I wasn't performing while we were using these, we did full sound checks and all to make sure everything was okay before hand, and these monitors sounded great up there. I could tell that all of the artists performing could hear themselves well, as we made sure that everything was okay and the response was overwhelming good. Obviously, it's incredibly important that everyone is able to hear on stage, as it affects the way you play. If you can't hear properly, it's hard to play properly! As I stated earlier, I don't do live sound very often so I don't know all of the factors when choosing a good stage monitor, but it seemed pretty obvious to me that these were better than average monitors. They're not too heavy as well, making them easy to move around the stage where you want them. We had about three of four of them on stage at once, but I would guess that a pair of them would do the trick in smaller settings. Not sure the price on these, but if you want some solid stage monitors that will get the job done well, the Meyer Sound UM-1P's are definitely a good option and should be checked out for anyone putting together an adequate live sound rig.
Did you find this review helpful?yesno
»