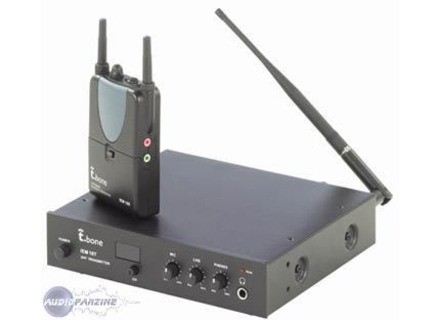 Value For Money : Excellent
View other reviews for this product:
- How long have you use it?
For two weeks, so I did not back the long-term reliability of the product

EDIT (September 2007): it is now nine months that I use, and no report, still works well trs (tomb several times) and self ok.

- What is the particular feature you like best and least?
The price is really good trs trs compared to competitive offerings. However, box a little bigger, more plastic, short, less pro in appearance and less rglages. TRS is a well.

- Have you tried many other models before acqurir?
MODELS of Sennheiser and Shure much more expensive (3 4 times). The latter are more "pro" in their ways, more prsentent rglages and give a feeling of more security leve, but the use, it works perfectly, and I see finally no diffrence in terms of quality. Shure with a system that I had some dj dcrochages in concert (LGERS, but when even some teachers), with the Systm no ... For the now, I never test as far trs (Golden Arrows), but c'tait really perfect.

- How do you report qualitprix?
I am struck that these products are still expensive trs ... In a few years I imagine that everyone that no longer use the in-ear and then everything will be cheaper .. However, this product, if we replace face competition is really cheap ... trs 2 times less than competitors mono, stereo while he is (unfortunately, it rarely falls on concert halls that can / want to do a nice little stereo mix).

- With the exprience, you do again this choice? ..
Yes, hsiter. Obviously, if I slap in the fingers during a concert in two weeks, I will not say a, but up Submitted, aa look perfect! The only thing in the stressful story is to trust a label of a German store, and accept to have a rev box "plastic" in appearance ... So I'll make sure to take care of, but again, the quality and reliability of the transmission, there is nothing to say is nickel.
.

EDIT (September 2007): force to use, it also includes useful to have a specially ingson Earbud derrire console

No weakness noted APRS 9 months of use (numerous concerts, rpt more per week)
See the source
Did you find this review helpful?yesno
Cookies help us improve performance, enhance user experience and deliver our services. By using our services, you agree to our use of cookies. Find out more.