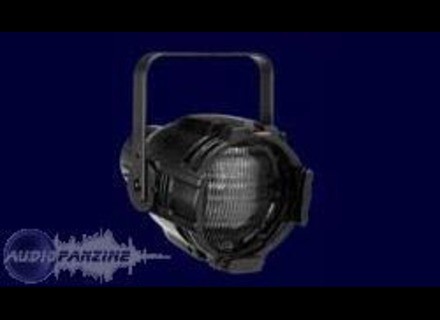 I bought mine in 2 MH broadcast, JB Systems.

1. HPL575 patented lamp is designed to give, with suitable reflector, a max of light without dying prematurely.

2. The special reflector enveloping (like a corolla) returns a lot of light in the desired direction and much less off-beam.

The beam gross (without lens to enlarge) has a distribution "cosine", which allows easy connection of multiple beams to one side smooth.

Comparison with the spotlight PAR64 1000W:

Brightness:
These projectors Multipar really give as much light than lamps with PAR64 1000W.
The comparison is very flattering because of the whiter light of multiparous appearing PAR64 the yellow side.

Two advantages:
1. The light contains more blue and you can either get more light with the blue gelatin, or put gelatins darker blue.
I use them primarily for this purpose.

2. Very interesting in places where it has a reduced electrical power.

Form beams
It is difficult to compare with those of the beams obtained PAR64:

1. The distribution of light in the beam is unlike.

ETC sells several accessories (shutters, additional grid or tube) effective in reducing faiscaux light outside, but it is very expensive.

When you buy the cheaper Multipar finally.

Cost price
Cost of lamps:
HPL575 lamps have a lifespan shorter than that of several lamps PAR64 1000W. So slight advantage in the long run to PAR64.
Current cost:
The winner is widely Multipar.

The case of the lenses in the exchange
To change the width of the beam, just change the lens choosing from the four that came with the projector.

The projector is very hot and his body aluminum expands. The lens may even fall alone if the spring that holds it is a bit loose.

So I broke my first lens.
For my second lens, it was a blunder at the top of the scale, the projector remains on deck.

Therefore requires the removal of the projector.
Now I am very careful: exchange of lenses on a table and not on the bridge ...

I also bought 2 sets of spare lenses in advance.

Comparing Volume-Weight carried
Smaller volume for Multipar slightly larger but two times shorter.
Difference even more pronounced if one is to carry additional lenses of multiparous compared to the need to carry multiple lamps of different width by PAR64 projector.

Higher weight because the body cast aluminum is much thicker. It's tough!
Except in the case where one would have to carry multiple PAR64 lamps.
Conclusion:

-When there is little current industry

-When looking for your blue more sustained than what can be achieved with the PAR64.
Did you find this review helpful?yesno
»

glinggling's review (This content has been automatically translated from French)

Starway Multipar
4
I use these projos 2 years they are more compact and slightly heavier than the PAR 64 and therefore prsenteent of the cot the default of their advantages ...

more compact, they fall more easily than 64, heavier they seem more solid and also they do not like dforment 64. BUT, in case of impact, a break will irremdiable ...

Big advantage, being able to change lenses plutt as changing lamps to change the focal length. Bananas can rgler is the lens that rotates, the lights finally corners, connectors or dfonces PARsafe hell. And the little BMOL: lentils are sometimes difficult out, a problem + or - Submitted under the brand projo (the original or its rplique ...)

and power! big advantage even light output almost identical to the PAR 64 to 45% less consumption. So I use them often live four to a household outlet for lighting of the site or show, plus they are discreet. Performing at work, I can be more crame glat than with conventional PAR. BMOL small, but really got by staff on dimmer, below 60% trs flow is hot, it really amber, orange boundary.

Today I will like to buy 6 more
Did you find this review helpful?yesno
»

See all 10 photos of Starway Multipar »

Other categories in Conventional Fixtures