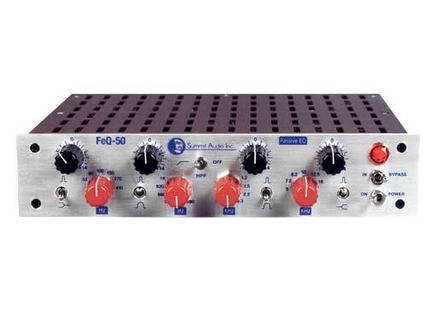 All user reviews for the Summit FEQ-50

Summit FEQ-50
5
The Summit FEQ-50 is a single channel passive equalizer made up of analog components. It has XLR connections as well as 1/4", including options for output routing through either the tube or solid state portion of it. It isn't rack mountable, but is about half the size of a single rack space, so if you had two of them I'm sure you could rack them together.

The make up of the Summit FEQ-50 is fairly simple, especially if you're familiar with the simple configuration of parametric equalization. It has four bands, each of which have gain knobs and frequencies knobs, which have set frequencies to choose from (about six different ones for each). They each also have bandwidth switches that have two different settings to choose from for if you want either a wide or narrow Q. That's pretty much all that you need to know about it's configuration, so I don't think that a manual is necessary.

The tone of the Summit FEQ-50 is incredibly clean sounding overall. I've used it on instruments of all types, as it is versatile and has the tools to be used for applications of all types. It doesn't color your tone beyond the cutting or boosting that you apply, but the FEQ-50 certainly has its own type of sound that is hard to describe or to compare to any other piece of gear that I can think of. I love having the bandwidth switches, as they really come in handy when trying to zero in on a specific frequency. While I generally like having complete control over the frequencies I choose, Summit has done a great job here by determining which frequencies are most often used.

For a high end equalizer, the Summit FEQ-50 is actually priced nicely. While it is probably still too expensive for most home studio owners out there, this is a great deal for professionals looking for top tier tone regardless of price, as you'll certainly save a bit of change when you compare this to some of the other equalizers out there. The FEQ-50 is a seriously compact piece of gear as well, as it will take two of them to fit them in a rack. I'm a big fan of most of the gear that Summit Audio has to offer, and wholeheartedly recommend the FEQ-50 as a nicely priced option for a single channel equalizer.

Robin Schneider's review (This content has been automatically translated from French)" The top in this price range!"

Summit FEQ-50
5
It is a monophonic analog equalizer. 4-band passive. The gain is compensated only at the chain ends via two outputs combined. One lamp in class A, the other transistor in class A / B.

Note: the polarity of the output transistor is inverted with respect to the lamp output.

The equalizer consists of 4 bands "parametric".
Why the quotes?

Because it is not a console equalizer with all parameters continuously variable.
Here, in a choice of 6 frequencies per band (well chosen) and two factors Q.
Note that the Q factor increases with the gain. (The bump becomes sharper from 10dB gain).

It is not a treatment for EQ is advanced to close Hz. It is an artistic tool for mixing or for minor correction to the socket.

It provides + / - 14dB gain per band. The low and high bands offer a choice between peak and shelf.

Qu'EQ as passive, it does not change the sound the same way as traditional active EQ.

This is fairly typical of passive EQ, especially with the output transistor.

Specifically, it is rather quiet and transparent earnings below 10dB, beyond that, it really starts to express themselves and can add intensity. I refer specifically to the 4.7 K background band on bass played with a pick, it's divine.

Acute to 18kHz band is also excellent to give a sense of detail and accuracy without the usual aggressiveness to 12kHz. I use it routinely for vocals.

Clearly, I love the sound of this EQ, which can give energy and extend to just about anything you give it.

I have not talked about the serious band, but it also works very well for low inflate a bit poor (lamp output over of course).

It is now one year that I use.
I also use my lamp EQ Universal Audio preamps, as well as the excellent EQ Neve Portico II.

Basically, the FEQ-50 is "harder" than the Portico II. The neve eq is really silky and luxurious.
This is not a defect to me just because I like the ability to harden the summit, or rather "consolidate" sound.
It forms an excellent complement to the basic EQ Universal Audio.

I have two FEQ-50 bought used on AF and I use both to take that mix. With the recent acquisition of Tl Audio C1 my 90s, I use them as my treatments master mixes.

Summit is very strong in providing a passive EQ of this quality for only 800 euros new.
Usually passive EQ rather turn between 2500 (copies of Pultec) and 5000 (massive passive).
Here, for 1600 euros the pair were two channels much more flexible than a Pultec (but less massive than passive).

Needless to say I would do this choice without hesitation!