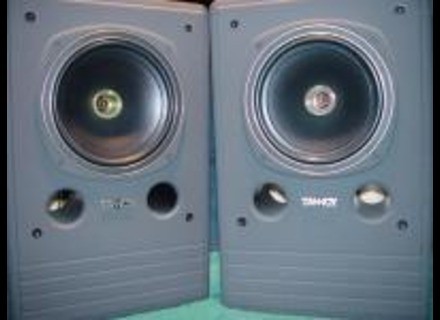 System 8, Passive Monitor from Tannoy in the System series.

Tannoy System 8
5
The Tannoy System 8's are a pair of monitors designed for use in the recording studio. They are indeed passive monitors, so they require an external power amplifier. I've used these monitors for monitoring during the tracking of a full band. Since this was only the second time that I had been to the studio I used them at, I'm not sure what type of amplifier we were using in tandem with the System 8s. The monitors are fairly large, but not nearly as large other Tannoy monitors that I've used before. Although I haven't used them for any other purposes other than monitoring during recording, judging by their full sound during this application, I'd say they would be suitable for mixing as well. However, I've yet to have the chance to mix on the Tannoy System 8's, so I can't say so for sure.

The Tannoy System 8's are tight and full sounding in general. I was using them as a pair of mid to near field monitors, and they certainly packed enough punch for me to be able to get an accurate read on what we were recording. I remember getting a very tight kick drum sound through these monitors, as the low end is very good for a pair of medium sized monitors. After listening to the unmixed and very rough recordings that we did while monitoring through the System 8's, it was clear to see that they had steered us in the right direction as the sound translated well to my monitors at home.

While certainly not the flagship monitors made by Tannoy, the System 8's are a very good sounding set of monitors that are definitely to be respected. They don't command very much money if you can find them, but since they no longer make them they have become somewhat hard to come across. However, when I have seen them for sale it is usually for a very reasonable price. While I used the System 8's in a professional recording studio, they can certainly be used in any situation that you might be in. I don't know if I would necessarily recommend seeking out a pair of the System 8's, as it would be somewhat hard to do and there are plenty of Tannoy monitors out there that are much easier to find, but I would absolutely recommend checking them out if you stumble upon a pair of them at a reasonable price...

See all 7 photos of Tannoy System 8 »

Tannoy System 8 manuals and other files