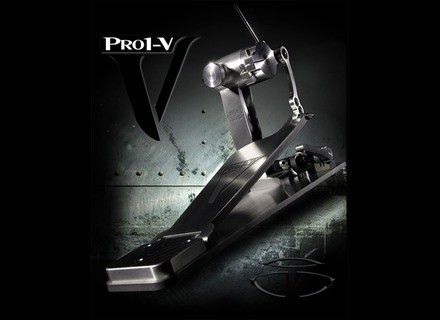 Rbs's review (This content has been automatically translated from French)

Trick Drums Pro1-V
5
I bought it yesterday. J'tais press and did not really bother to try it before taking it. Dj I read positive reviews trs the manufacturer's website and its appearance is highly robust DCID me. An hour later I was doing a concert on it ...

By buying it I thought "well, it will not be RULES best when you play it all the time but hey, even when you get there ..."
In settled down just before the set (APRS have some tudi user manual qd same), I t stunned by the ease of rglage: a big wheel for r Gler the hardness of the spring by hand, a screw (with scale) for rgler the angle of the bat. I never as comfortable on a t pedals during a concert with it, yet in 3 min RULES chrono in the speed of a concert.

There are other rglages for, including the height of the pedals and the tilt of the transmission, but it's dtail.

The concept is Entran rvolutionnaire. It is not clear as a dcrire, but the movement of mcaniques is a logic and perfection that I had ever seen on a bass drum pedals.

I have a long jou Iron Cobra. C'tait powerful but too heavy, too much inertia. In addition, she started from in tatters after 5 years. Then I possd an Axis. C'tait flexible, fast, prcis, trs not especially powerful and has had a catastrophic hardware. It broke in every sense (and I ride my Hardware disassemble each rpt ') and tips to find the format amricain c'tait really galre.

With Trick Drums, I found the power of the Iron Cobra, but with the control and the rapidity of an Axis. All with rglages a clear and simplicity that would support a hardware conflict NUCLEAR ...

Trs trs is expensive (especially in France, living importers), but I do it again without hsiter this choice, especially since when I have the budget, I m'achterai Kit adaptation by double pedals (but may not be in France).

I am not the maximum because I played an hour for the time being (but observes and dj tudie all day long the next day), which does as m me not to judge his tural solidity.

BalticWolf's review (This content has been automatically translated from French)" Excellent, but at what cost?!"

Trick Drums Pro1-V
5
It's been six months that I play this bass drum pedal. Very fine adjustment, fast and efficient. It's fun to play, because the material is of great maneuverability. The spring, which compresses when typing (while the other pedals, the spring stretches), adds a lot of nervousness in the game
Level mounting drum circle: it is simple and reliable. We ask no more.

I played in Iron Cobra, which satisfied me, but I found the ultimate in Big Foot. Strictly speaking, the Demon Drive Pearl has a touch that comes close ... However, for anything I would do a different choice of Big Foot at par for the classic version (to the base shorter).

This equipment is very expensive and therefore reserved for a "crazy drummer." You either fall on the right opportunity, or have money aside.