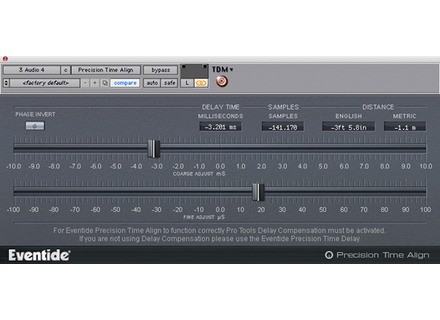 All user reviews for the Eventide Precision Time Align

Eventide Precision Time Align
5
Eventide's Precision Time Align is a unique plug-in designed for bringing mostly drums into phase if they are slightly off. The plug-in is a part of the Anthology II bundle and while I don't know if it's available individually, it's probably only going to be worth it within the context of the larger bundle. I don't own this bundle myself so I don't have this plug-in at home, but the studio I work at has it on just about all of our machines. I wasn't at all involved with installing the bundle but I can't imagine it being an issue for too many folks out there. As for the interface of the plug-in, it's pretty simple to follow. You can align it one way or another as it gives you control up to 10 milliseconds either way. It will also show you the distance moved in both metric and English terms. It also has a straight phase inversion button as well, which is always nice to have. The manual isn't something that should be necessary for this plug-in, although I haven't had a look at it for myself.

The systems that we're running Eventide's Precision Time Align plug-in on along with the full Anthology II bundle are all Pro Tools HD systems. I haven't used it on an LE system or something similar, so needless to say I haven't really ever had any problems at all running this plug-in. It is worth noting that you need to have delay compensation on for this to work properly since you're making such fine adjustments. I can't see too many users having problems running this plug-in, but that's assuming that you're running a decent enough system or run Pro Tools adequately to begin with.

The Eventide Precision Time Align plug-in is really a great one to have around. Before I knew about this plug-in I can't tell you how many times I've had drums that are slightly out of phase but don't warrant a complete phase reversal. This helps with those finer adjustments, and I can't say that I've seen another plug-in that serves the same function. If you can buy it individually it might be worth checking out if you're going to be using it on a daily basis, but otherwise I'd check it out within the context of the Anthology II bundle, which is a great one for any DAW owner to have...
View price information
Did you find this review helpful?yesno
Cookies help us improve performance, enhance user experience and deliver our services. By using our services, you agree to our use of cookies. Find out more.