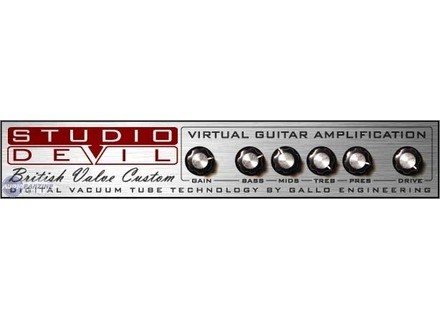 All user reviews for the Studio Devil BVC [Freeware]

Studio Devil BVC [Freeware]
4
Studio Devil's BVC, or British Valve Custom is a free amp modeling plug-in. I believe that it's the only free plug-in available from Studio Devil, as is available in VST, Audio Units, or RTAS formats for either PC or Mac operating systems. The plug-in is really designed to give users an idea of what Studio Devil is capable of, and I'd say it does that well. You can download the plug-in right off of Studio Devil's website and have the plug-in installed in your DAW in minutes. Learning how to use the plug-in is also super easy, as it's got a simple panel of parameters to work with that are not at all unlike what you'd find on an amp. These parameters include knobs for gain, bass, middle, and treble, presence, and drive. It's the simplest plug-in from Studio Devil, as to be expected since it's free. The manual has pretty much everything you'd want to know about the plug-in, but isn't going to be necessary for most users.

I recently downloaded and installed Studio Devil's BVC plug-in to my Pro Tools LE 8 based home studio rig. I run the plug-in on a Mac Book Pro that has a 2.2 Ghz Intel Core 2 Duo processor and 4 GB of RAM. I'm running Pro Tools LE 8 with a Black Lion Audio modded Digi 002R audio interface and I'm monitoring everything through a pair of Adam A7 monitors. I've only been running the plug-in for a few months, but I've yet to have any issues whatsoever related to performance.

The Studio Devil BVC (British Valve Custom) is a nice little amp modeling plug-in, and is especially nice since it's free! It's really easy to use and actually has a pretty good sound considering it's free. In generally I don't do too much amp modeling inside the box, but I'll never say no to free plug-in. So while I'm not sure how much use this will see when I go to mix some serious projects, it's still nice to have just in case. It's definitely got it's own color and can certainly be more than useful when used in the right situation. Adding the plug-in to your suite is really a no brainer being that it's free and is available for most any platform. Stop reading this review and try it for yourself!
Did you find this review helpful?yesno

Everything works great! Seems not to eat too much CPU!

I possde the paid version ($ 80) and I must say it is excellent! I possde other VST amp trs is the best known and my opinion. Not a gas plant with 10,000 choosing amps, cabinets, microphone placement and 2 billion items. In short it is simple and effective! No bees, no longer as in others.
Did you find this review helpful?yesno
Cookies help us improve performance, enhance user experience and deliver our services. By using our services, you agree to our use of cookies. Find out more.