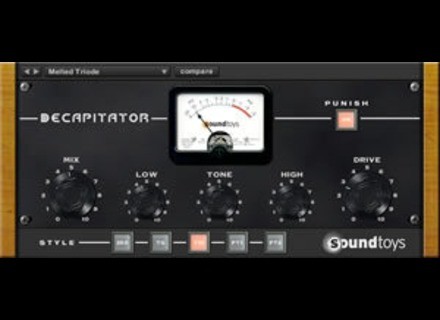 All user reviews for the Soundtoys Decapitator

Average Score:4.8( 4.8/5 based on 4 reviews )
Buy this productView price information >
Not satisfied with those reviews?
Our members also liked:
Buy at Sweetwater

Soundtoys Decapitator
4
There has never been such a suitably named plugin as the Soundtoys Decapitator, it really will take your head off with some of the sounds it can give to your tracks. Beginning with the installation, which is quite straight forward as most Soundtoys plugins are, no compatibility issues with Logic Pro 9 at all and when loaded up it is a very clear and engaging interface. The manual is always there for plugins of this nature but for this Soundtoys product i would recommend you just dive straight in and start playing around with the features. The Decapitator has an intuitive GUI and clearly labelled controls apart from the letters along the bottom but we'll get to that part later.

I have been using the Decapitator for almost a year now and can confirm it works perfectly with Logic Pro 9 on a Mac computer with 4GB of RAM on OSX 10.6.8. It is very stable in my experience, no random crashes or anything like that. The performance is very good and is fairly light on CPU usage, although in any given project i can't recall using any more than 3 or 4 instances of the plugin but with no noticeable CPU spikes none the less. Some users may want to put 1 on every channel to get a subtle saturation effect for mixing into which i would recommend if you're CPU can handle it (bear in mind you would likely be using more plugins on top of the decapitators) otherwise try 1 on every sub mix or bus to get a taste of what it can do.

Now, onto the letters at the bottom. Each letter stands for a different saturation type that is based on real analogue consoles and hardware, so you can dial in settings for the other controls then switch between the letters and the effect will change slightly. Much like other plugins who are 'influenced' by real analogue hardware and consoles, they sometimes don't directly disclose what brand they have modelled because it hasn't been officially licensed, although in the Decapitator manual it does describe in some detail the gear that influenced the saturation types.
With the Decapitator, here are what the letters represent according to the manual;

The difference between T and P is that T produces even harmonics and P produces odd harmonics.
So with all these different models, it really can be a one-stop-shop for saturation and distortion. As well as all of this, the plugin also features filters for cutting the low end and high end to remove some muddiness and high end fizz that can happen when really going for it with the drive setting. The thump switch is useful for kick drums or the low end of guitars because it adds a few extra decibels to the cut off frequency of the 'low cut' control. The Steep switch transforms a 6db per octave high end filter into a much steeper filter which can be used at a cut off around 4-5khz to simulate a guitar cabinet if desired. The Punish switch (as you can imagine) adds a ridiculous amount of distortion onto what you've already got, plus another 20db's of gain according the manual! If you're having a long day at the office then this switch will definitely perk you up a bit. Make sure to press the auto output switch in conjunction with the punish switch the first few times.

The thing i like most about the Decapitator is it does extreme but in a way that can be actually be used without sounding awful like some distortion plugins. The tone and low end/high end filter controls are very handy as well. Try it on a simple drum loop to hear the effect it has on each part of the kit, changing the letters at the bottom to get an idea of the character of the different hardware models. It is an incredibly useful plugin that can be used in every mix. You can use it sparingly if you wish, but The Decapitator is a lot like Will Smith, he did good just as a rapper but when he got into acting more and pushed the boat out that's when his true talent shone and things really took off... So sit back, max and relax and turn the drive up on this bad boy to really hear what it can do!

Overall, The Soundtoys Decapitator knows how powerful it is. Yes it can do subtle, but with a 'Drive' knob the size of Jupiter and a button that says 'Punish' - you know deep down that this plugin is truly in it's element when it's seriously distorting your audio. A fantastic saturation/distortion plugin with a not-so-fantastic price but still a must have when it comes to producing and mixing so start saving those pennies.

Soundtoys Decapitator
5
The SoundToys Decapitator is an analog saturation/overdrive plug-in. I wasn't involved with the process of installing the plug-in, as I used this on a system that was not my own. The interface of the software is generally pretty easy to use and is straight forward. As far as parameters go, you've got knobs for mix, low cut, tone, high cut, and drive. It also has a button for 'punish' and five buttons to choose between different preset styles. A manual isn't necessary in my opinion, even though I haven't seen it so I can't say anything about its make up.

I have run SoundToys Decapitator on a Pro Tools HD system, so the performance I'm getting from it will be undoubtedly different from someone running it on a Pro Tools LE system or something comparable. However, this isn't the type of plug-in that will generally speaking take up too much processing power, so as long as you have a system where you're currently able to run plug-ins without a problem, I'd say that you probably shouldn't have any issues running this one.

These days there are a lot of plug-ins out there that aim and claim to add 'analog' warmth to your sound without actually inflicting any sort of analog component on the signal. For me, this is really an impossibility and I haven't found anything that will stand up to true analog gear and I don't think that I ever will. This being said, the SoundToys Decapitator sound pretty darn good for an 'analog' saturation plug-in. It isn't the end all be all by any long shot, but for adding some warmth here and there to your mixes, it will certainly be an asset. It won't cost too much money, making it the perfect addition to the plug-in suite for the home studio owner looking to compromise on a plug-in when a piece of analog gear might not be available.

sonicsnap's review (This content has been automatically translated from French)" Hot!"

Soundtoys Decapitator
5
Simple installation and authorization, but it takes an I-Lok key.
Decapitator is a plug-in saturation. We immediately notice the big knob "Drive" which determines the level of saturation, and right next to the "Punish" button, which accentuates the effect until the distortion, as if the drive was up to 20 instead of 10. We subsequently two filters (Low Cut and High Cut) and a tone knob (bass / treble). With Low Cut, we have a "Thump" button which gives a slight resonance at the cutoff frequency, and with the High Cut a "Steep" button that makes the filter slope of 6 to 30db / octave pass. Remains a knob "dry / wet" (always good practice to keep spikes) and an output setting, which, thanks to the "Auto" button can automatically compensate for level changes according to the intensity of the drive and the "Style" selected. Style? Quésaco? Indeed, it has five buttons "Styles" (A, E, N, T, P) which correspond to different emulations. A saturation emulates a tape recorder preamp, E and N those slices consoles and those of T and P module vintage distortion. These "Styles" are described in detail in the little manual a dozen pages. Note for "Thump" buttons, "Steep" and "Auto", they are active when they are raised and off when they are lowered, which is unusual.

This plug-in works without any problem on my Mac Pro with Mac OS 10.6.8 and Digital Performer. CPU consumption is insignificant.

I use Decapitator for three and a half years. I'm pretty well endowed with plug-ins distortion and saturation. But it is essentially competing with huge Ohmicide Ohm Force and very friendly Bad Buss Mojo Stillwell Audio (see my review of these great plug-ins.) All three are very good and I don ' have no general rule to use one rather than the other. Must be tested. Decapitator can be used both in small doses for a warm sound (in this case, I like the "Styles" A or N), so that more muscular with Inrush (where "Punish" button, I generally prefer the "Style" P.) In both cases, it produces an effect of quality and its pretty hot: The analog emulation is rather successful. I've used on voice (in a "industrial" part) and synths, but it works well on virtually any source. Very simple to set up, we get what we want quickly. Altogether, I'm very happy to have in my tool Decapitator and I do it again this choice despite its relatively high I found justified by its value.

2HO's review (This content has been automatically translated from French)

Soundtoys Decapitator
5
Quick installation and pro authorization ILOK therefore stable and fast.
No inconsistency on macbook.
Pdf manual clear and well done, even if the SoundToys plug-ins are very intuitive.

On macbook pro 2.53 GHz with 4GB of RAM
Plugin stable, no bugs and the final version since it no longer consumes too much CPU (between 1 and 6% depending on the settings and the complexity of the processed signal).
Three months of public beta testing, with two versions is a good job knowing that the first beta version did not include me in that some micro bugs.

The beta version was released in December and since I use it in all my mixes.
This is a very good saturation with very large effects according to the settings and a button "Punish" particularly devastating (hence the name of the plug).
Not tried other models because until now he dazzled me wherever I needed to saturate the signal.
Value for money I do not know because the upgrade bundle of V3 and V4 with Decapitator PanMan is only € 99! So I say to the possessors of the best available bundle V3 (I think the price is 179 € for the two plugs purchased separately).