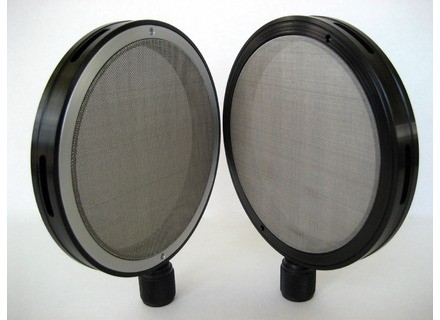 Pete's Place Audio Blast Pad Filter
5
Yes. It is that remarkable. Pete's Place Audio has created a magical item that can't really be called a pop filter, that, after messing around in a friend's studio, makes my nylon filter look like a rotten tomato.

Before I get into anything else, as a singer, I have to say something absolutely shallow, but shared by all vocalists: the Blast Pad Filter doesn't intimidate me. This is extremely important. By itself, it has the sex appeal of a Blue microphone, and I think more importantly, is translucent (partially transparent). This means that you can see through it to the microphone you're singing into. With traditional nylon pop filters, I tend to feel a bit boxed out from the recording, so this is by itself, a time saver, if you own a studio. You'd not have to do as many takes.

Secondly, it works as one of the best pop filters around. I had a blind test done between this and a traditional pop filter, and believe it or not, I could tell a subtle difference between the two samples. And by difference, I meant that one sample actually had a superiority over the other. Lo and behold, the Blast Pad won. This is understandable; pop filters are a tool that no one likes for the psychological effect AND the fact that some of them do obscure the sound a bit.

Finally, I had a ribbon placed in front of it, and was told to blow as hard as I can. Then, the ribbon was put in front of a VERY loud guitar cabinet. All of a sudden, a Coles had captured the sound of a guitar cabinet. So. Yes. Even if you have to pay a relatively nutty amount of money for it, this seems to make your microphones pretty invincible toward SPL, so if you're a) bored and too rich, b) interested in different sonic possibilities, or c) an owner of a studio that sees a lot of business, you want a Blast Pad. Now.
Did you find this review helpful?yesno
»

Pete's Place Audio Blast Pad Filter
5
Pete's Place Audio's Blast Pad Filter is a unique pop filter for your microphones. It can be used as a traditional vocal pop filter, but has higher capabilities than this as it's designed to protect microphones from high SPL's. I've really only used it as a traditional pop filter for recording vocals, but it's definitely a nice thing to have around, especially if you're using ribbon microphones often. I don't really know what kind of materials the pop filter is made from, but the stitching seems to be heavier than your average pop filter for sure, and is on both sides of it. This is a tool that's going to be strictly for use in the studio...

Want to record drums and electric guitars with a your sensitive ribbon mics, but are afraid to blow the ribbon? The Pete's Place Audio Blast Pad Filter is perfect for you! Some ribbon microphones won't need something like this, like the Royer 121's which can withstand a good amount of pressure, but for something like a Coles 4038 that's a bit more sensitive, the Blast Pad Filter is going to help you out immensely. The only reason that I don't give this a 10/10 is because of the price. It's definitely an expensive pop filter, but if you're a professional studio owner with a lot of ribbon microphones, it could certainly be worth your while. It's not an absolutely necessary thing to have, but will save you from some headaches if you're worried about blowing your ribbons. It doesn't affect the sound quality negatively at all even when using it as a traditional pop filter, as even though it's got a heavy layer of filtering between your source and the mic, it's not enough to block any sound at all. I don't know of any other filters quite like this one, so if you're after something to protect your microphones and beyond, the Blast Pad Filter is definitely worth checking out.
Did you find this review helpful?yesno
»