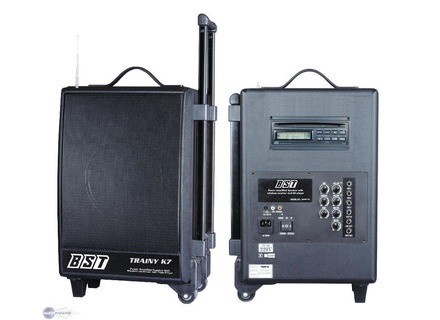 rénaldp's review (This content has been automatically translated from French)" Pitiful"

BST Trainy CD
1
I can not understand that we can give a good rating for this product.
Barely unpacked, first listening to a CD, return to sender. Rarely heard a sound as rotten.
Even at a school Kermesse the sound is much better.
Did you find this review helpful?yesno
»

Roving gambler's review (This content has been automatically translated from French)

BST Trainy CD
5
We use the trainy for 1 year for small concerts in the street. What we liked most is that it runs on battery, which allows us to play Fawn autonomous absolutely o you want. There were fears of a hard indpendance too limit the battery for now, does it ever being, even after two hours of spectacle, has always operates without dclin any volume! The sound quality is good enough neutral, at least good enough for small gigs street in front of fifty people.
Here is the fawn that we use. We have two guitars and two voices. We have three between "mic". So we plug two microphones (SM58) on two separate entrances and two guitars on one enters with a doubler. Each has a volume between clean. We do not use the effect "chorus," I do not know what it is trs, not knowing me gure indeed, but I think it trivializes a little sound. There is also a button to the tonal rgler properly perform its function without being overbearing. Everything is basic but obissant; has held the road.
Here is my opinion on the sound. Obviously, I am talking about a battery-powered hardware in one pice and compact, the fate of street performances. Our goal in this configuration is not to get his irrprochable than simply be heard, with its brand of the same enjoyable and neutral. For a, we are really satisfied. The sound of the voice is rich enough prcis, enjoyable. The guitar sound is reproduced Fidler, without caricature. Everything is clear, robust and end. We mean, the projection is good. For the use made of it is top.
Practical level, the machine is heavy but it is dot wheels and a wrist. It should however be careful because this countrv Systm roulette is quite elementary and a bad soil trainy stumbles and loses his balance.
This unit is a bargain.
Did you find this review helpful?yesno
»