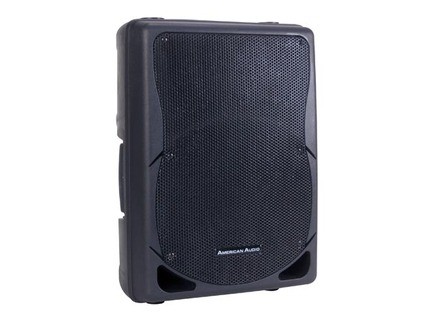 American Audio XSP-10A
4
The American Audio XSP-10A's are powered PA speakers. You can use them on their own without a mixer, or use them with your DJ mixer or even a PA mixer. I've only used it in a setting where we were playing music from an iPod. For this it of course works well, as it's not a huge speaker. For the record, we were only using one speaker for this. As far as technical notes are concerned, it has both XLR and RCA connections and since it's powered you won't need any external power amplifiers. It's got a 10" two way powered speaker and 200 watts of power in total. It also has EQ control and a handle for easy carrying. It's actually pretty small and isn't tough to move around at all. The down side of that is that they really can't get that loud, although for parties or small venues it might be just fine. It had a good sound playing some songs from an iPod, but I'd be curious to hear how a few mics would sound through it. My feeling is that it would be okay for a band to practice with or a small venue, but I don't think that they'd be able to sustain anything other than that. I also think that they're a bit overpriced, although maybe there is a better deal out there for them that I haven't seen. I don't know very much about American Audio, but these seem to be built fairly well. It's not the best PA speaker out there for the price, but it's not the worst. I probably wouldn't buy them but if you're a DJ and need a PA for parties or small clubs, this could work for you just fine. Still, I would like to see them a bit cheaper than I've seen them to be. As always makes sure to check on some other brands in the price range as I've definitely seen some other cheap PA speakers out there. I wouldn't say that these are the best deal I've seen when it comes to PA speakers on the smaller end, but the American Audio XSP-10A can still be adequate in the right situation.