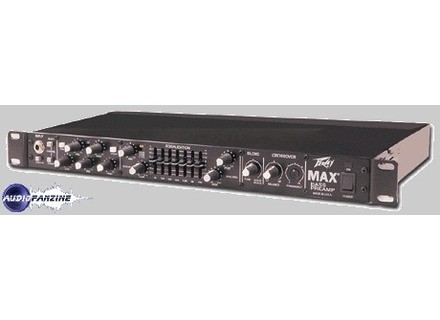 yol250's review (This content has been automatically translated from French)

Peavey MAX Bass preamp
5
All analog.
Two channels: lamp and transistors, they can be used simultaneously with pottard to adjust the proportion of each channel present in the final mix
No effects available.
A low input, two outputs direct out (XLR and jack), three output amplifier (complete signal, bass and treble), effects loop and 3 footswitches (channel select, combine the 2 channels, effects loop and it / off)
Model 19''rack (1 slot)

Once one has studied the sound on each channel, you have to go a little more time if you want to combine them, or return to the equalizer, but nothing annoying. It is probably a bit more complicated if you want to use the crossover to redirect two amps, but I never had the opportunity to try.

In summary, surprisingly, everything is clear. As a result, the manual is extremely succinct, but there is not much to say.

Very good sound for this preamp. I use it exclusively in making return to the return of the effects loop of my SWR, I also tried various other amps, and it is a joy. I have a preference for the channel lamp, with whom I can have a well rounded, with a very slight saturation. I rarely use one channel transistors, but in combination with the light channel that allows you to add a little punch and attack her. The channel does make a light color to the sound, the other looks pretty "neutral".

Attention, after several hours of use, the channel light saturates much faster (but my lamp is a bit old, I think), which is not really annoying, but sometimes requires a little tinkering to gain.

I use this amp for 3 years, and I really have no complaints. Being able to combine the two channels provides unparalleled flexibility, and allows the sound peufiner endless. The big positive is that the sound of the instrument is not distorted, and is very natural with this preamp, working in subtlety. A negative ... ben frankly, I do not see ... ah, yes, a little compression, it would have been nickel, but hey, it's a preamp, not an effects processor. This is the first bass amp I bought, I have tried other later, but never as convinced. In addition, it is generally very sturdy, you could almost drive a nail with (if not for the lamp), the pottards are strong, and very well placed. I bought the $ 100 used, and under these conditions is to me a * good * quality / price ratio. Now I use it alternately with a bass v-amp pro (different needs ...), and I'm not near the store in the closet. I am not only 10 for the form.