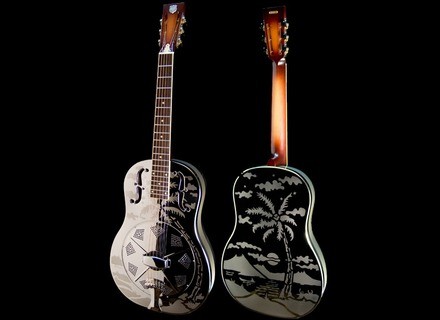 Aure75's review (This content has been automatically translated from French)" ouhaou it's heavy!"

National NRP Style 0
5
Made in the USA. Warning NRP guitars are not "vintage" of the National brand. The company, founded in the late 1980s, took over production of the former National trying to best comply with the tradition and quality of old.

Made in the USA in California

The style 0 is a classic, steel / nickel with etched palm (model Knopfler in Romeo & Juliet, etc.etc.). This is a guitar with a single cone (as opposed to three Tricones who) asked bisque (ie the cone is turned to the inside of the body and projecting into the credit union, Unlike the "spider" which are rotated in the other direction.

This is a cut for the blues machine.

I had the opportunity to try a long time (an hour) after trying several other resonators.

What is surprising is the great playability of the instrument, both finger (I'm finger picking as boy ...) that slide. The instrument is very well finished, everything is super neat, and it's a guitar that ages well, unlike many other resonators that was given to me to try.

The sound is obviously very metal, you must love. But what particularly appealed to me about this guitar is that it is very rich, much more than in the resonators entry level.

Access to acute is limited in version 12 frets. Personally it does not really bother me because I used to play a parlor. FYI there is also a version 14 frets that solves this problem. I have not had the opportunity to try

Last thing, the guitar is heavy metal oblige! So about 4kg not to count to a marathon!

It's built for the folk blues, but I'm pretty sure we can use it for many other things (funk pulling the banjo side that can be playing). The guitar sounds wickedly!

Again, not to be confused with vintage 30s! It seems that there is something else, but for my part, I have not had the opportunity to try the vintage, so ...

Too bad they are so expensive in Europe (in 3000 euros new). They are found by used against less prohibitive prices ... around 2000 euros. In the USA and Canada, it is cheaper at the moment, but there are customs ...

Anyway, I fell in love and that's my next purchase, most likely! When I have the Soussous in popoche!
Did you find this review helpful?yesno
»