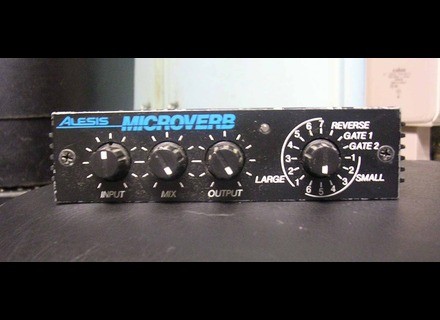 All user reviews for the Alesis MicroVerb

Average Score:3.8( 3.8/5 based on 5 reviews )
Not satisfied with those reviews?
Our members also liked:

Alesis MicroVerb
4
The Alesis Micro Verb is a compact digital reverb unit, it is not rack able. It has 1/4 inch inputs and outputs in the back as well as a 1/4 inch output in the front of it for a foot switch.

The configuration of the Micro Verb is pretty easy to figure out overall, as there are no tricks involved at all. From left to right, the unit has four buttons to choose the reverb mode, a meter to show the output level, and then has parameters in the form of knobs for input level, three equalization knobs for low, mid, and high, a knob for setting the reverb level in the mix and then an overall output level knob. It also has buttons to put the EQ in or out as well as a button for power. I don't have the manual for the Micro Verb, so I can't speak to how complete it is.

The sound quality of the Micro Verb is pretty good but is nothing to write home about in my opinion. It has a good amount of different reverb sounds but to me none of them stand out all that much. I have used this reverb on a number of different instruments including for vocals, drums, and guitars, and while I'm usually satisfied with the sounds I can get, nothing on this unit really sounds above average.

I've been using the Micro Verb for about two years and while I like the unit as a whole I don't use it all that often because I would rather use a reverb plug-in for convenience. To me I can get a comparable if not better sound from a reverb plug-in and it just isn't worth it to use a piece of outboard gear if I don't have to. Only thing is, I have digital plug ins with my daw that have the exact same sound as this..so I really don’t have a use for it anymore.

Alesis MicroVerb
4
The Alesis MicroVerb is a compact reverberation box that can be used in the studio or on the stage. I've only used this little reverb box in the recording studio for getting some quick verb, but it's certainly suitable for any sort of use. There are a number of different version of the MicroVerb, but this review is for the original. We have one of these in one of the smaller studios in the studio complex where I work, and it's already hooked up to the patch bay so I don't know the connections in the back since I haven't had a need to hook it up. It isn't rackmountable exactly, as it takes up about a third the size of a single rack mountable space.

The configuration of the Alesis MicroVerb is quite simple. There isn't much to using it at all, as it only has a few different parameters to work with. This simple make up is the reason I like using it for getting a quick reverb sound, as otherwise I don't find it to be incredibly useful. There are a number of modes to choose from, including a variety of large and small reverb room sizes, two gate reverbs, and a reverse reverb mode. It also has parameters for input, mix, and output. A manual isn't needed, although I haven't seen one so I can't speak to how well it's put together or not.

While not the most impressive sounding reverb out there, for a small compact box with a good amount of different sounds, the Alesis MicroVerb gets the job done just fine. I don't think that I would use it for printing any reverb, but I use it a lot just for getting a quick sound to listen to in the studio and then later I'll print reverb with the real plate reverb that we have. I like the larger room reverb sounds the best, but the reverse is awesome sounding as well. In general the sounds aren't the most realistic, but are certainly more than useful.

The Alesis MicroVerb has become somewhat obsolete, as there are many reverb plug-ins out there that are capable of getting these sort of sounds and better. However, it is a cool little box and I do use it on occasion if I'm looking for this sort of sound. While I must admit that it doesn't make it on too many recordings that I've done, I still enjoy using it as it's nice to have for a quick auxiliary reverb if I don't want to use a plug-in or I'm in a room that doesn't have a plate reverb. All in all, while I can't say I'd recommend buying one, the MicroVerb is a cool little reverb that will still see some use out there...

5 small, 7 wide, delusional and a reverse mode and 2 single gates.

no editing, 4 knobs on the front panel manually

simple, it all fits in a minute and a half

Lots of charm for the 12th Japanese bits.
preferences wide and 3 to 6 guitars and synths, reverse and small 5 and 6 for bass and drums.

a lot of models, this one to its charm for some environments, the time convolution etc ...

Very nice on occasion
Did you find this review helpful?yesno

toche13's review (This content has been automatically translated from French)

personally, t, I always found the effects quite a bit contrived and motens

I use it for 20 years, but I do not useful any more, over time potentiometers generate a small scratch not very pleasant.
There must surely see better now

Eclésiaste1983's review (This content has been automatically translated from French)" Sympathetic"

Alesis MicroVerb
4
It y 'a whole range of effects available (the wheel rotates 360 degrees, however, do not turn to change the current setting of set ... it induces a snap if it is done in the counterclockwise direction of wise)

it has no editor but it's really PC format Pocket he returned safely in a pocket bagguy ...

The technology used is analog, connectivity is Jack

The general config is simple not need the tray to understand how to fix it ... lol

I use it to add a delay on a hyperbolic folded horn sub ...

The effects are realistic enough given the size of the box ...

I use it since 2008, the value for money was OK, with the experience I would resume a model of the range above to see ...