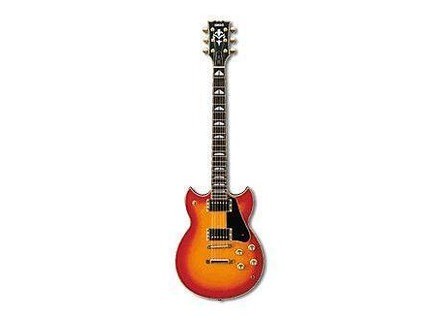 SBG1996, SG-Shaped Guitar from Yamaha in the SBG series.

Fockwulf's review (This content has been automatically translated from French)

This is the classic architecture of a Les Paul, that set neck to the body, both in mahogany, but with a flamed maple top AAAAA. The profile of the handle is like a Les Paul, but a little late ... ebony fingerboard, pearl markers. 22 Jumbo frets, bridge-type stop bar (like a Les Paul).

The handle is quite nice and fast, despite the gloss. Gibson is typed, so amteurs handles for go your way.

Access to acute is facilitated by cutting the body so as SG.

the chamfer made in the body can hold it against you while playing standing. however it weighs its weight (normal given the quality and thickness of wood).
However the attachment of the strap is a problem in that it tends to tilt the guitar when playing standing. So we see more marks on the handle.

The sound is huge, regardless of the positions: the double round immediately gives sounds Jazz / Blues or Santanesques with the amp that goes. The microphone is more aggressive and sharp-edged (the AC / DC post with a vintage Marshall!).

In addition, the ability splitter both pickups gives a impressive range of grades as soon as you place the switch three positions "intermediate". The pickups give a once split its relatively crystalline, but hotter than a Start '

The only criticism is perhaps the lack of precision microphones with a huge distortion. If it does a grave for his 70's, is less convincing when it comes to the Nu-Metal (but hey, no EMG, it's hard ...)

I have since 1997 (by hasart found in a shop in Pigalle while I was looking for a Les Paul), bought for a pittance next to his caractéristiqes sound and violin.

She faults and qualities of a Les Paul, with a slightly different form and the ability to split the pickups.

If it again, I'll be wrong, because the probability of finding one is so small ... I would have to take an SG 2000 ...
Did you find this review helpful?yesno
»