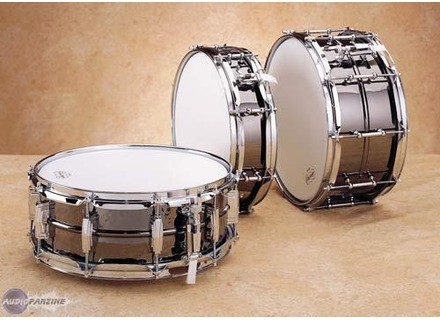 Ludwig Drums Black Beauty
5
The Ludwig Drums Black Beauty is a top notch snare drum that I have used inside of the studio.  I've used the drum a number of times in tandem with a full drum set, and have become a big fan of the drum for a number of reasons.  First, the drum has an extremely full bodied sound.  It is perfect for those types of recordings where you are looking for a deep snare drum sound.  While it is a deep sound, it also does have a good amount of snap to it, so I find that it still cuts through the mix very well.  The drum is very sturdy and well made, which is something that I have come to expect from Ludwig, so I never have to worry about it breaking during a session or anything like that.  The Black Beauty also has a very sleek design, which is always good if you want to impress your clients!  While I don't own this drum as I'm not a drummer, I have used the drum on enough recording sessions to be able to say that it is one of my favorite drums to record with.  I don't think that it is suitable for all types of recordings, but when it works, it works extremely well.  The main thing as an engineer is to know when to use it, which can be tricky sometimes.  The price of the Black Beauty isn't cheap as this is a high end snare drum, but for those drummer and studios looking for a top notch snare drum to add to their rig, you must know that this is the price that you are going to pay.  If you're looking for a full sounding snare drum you should definitely be checking out Ludwig's Black Beauty as I don't think you'll be disappointed that you did.
Did you find this review helpful?yesno
»

Ludwig Drums Black Beauty
5
Ludwig produces all kinds of great drums, but it seems that they are most famous for their metallic snares.  I have played dozens of metal snares, both vintage and modern variations.  Without a doubt, the Ludwig Black Beauty is the best snare I have ever heard.  This is by far the most prized individual piece in my collection.  It is very expensive, but its performance more than makes up for the price.  I first heard a Black Beauty a few years ago and searched tirelessly for one used for about 6 months.  Though I wasn't in need of another snare, this was a purchase I had to make.

It is almost difficult to review this drum because it has high scores across the board.  It has a beautifully rich and deep quality, gently reflecting its metallic properties but retaining a mellow sound.  The rim shots are amazing as they bring the entire snare into unanimous harmony.  Side sticks and rim clicks are pronounced and musical.  I swear, even hitting the side of the snare sounds better than in other models.  This is just super musical.

Because I got it used, the snare already had drum heads on it.  It had remo drum heads, including an ambassador batter.  I am not sure if these are the best for this, but because they sounded great and were in good condition I have not tried any others.  In a few more months I will probably try to experiment a bit.  I have a feeling that all heads sound good on this drum.

The lugs and snares were extremely high quality.  It is a striking drum, shining with thorough engineering.  There are really no downsides to this, except for the high price.  Despite the cost, giving a few minuted to listen to a Black Beauty is usually all it takes before the price seems irrelevant.
Did you find this review helpful?yesno
»

Ludwig Drums Black Beauty
5
(Originally written by Rego/translated from Audiofanzine FR)
I have several Ludwig snares (LM 411, Vistalite, Bubinga, Brass on chrome, etc.) and I recently bought a rare and new model!!! It's a 14x5 hammered Black Beauty with golden hardware like a Brass on Brass from the Ludwig catalog but hammered. And the best is that it has the old serial number badge. Generally Ludwig makes theses snares for its endorsers. I was lucky to find one but it wasn't cheap... The snare has a unique sound. Hammered Black Beauties have a phenomenal sound. You can play everything with such an instrument. I've been playing for 25 years and I had never heard such sound perfection. It's true, it was very expensive but it's worth it and I can't get tired of this snare.
Did you find this review helpful?yesno
»

arnaudrum's review (This content has been automatically translated from French)

Ludwig Drums Black Beauty
5
If the Queen is a snare, then it is called Black Beauty ..... Nothing to say about the sound is very rich, very incisive ... I for my part, the 14 x 5, changeable at will ... and it is beautiful as well ... We play jazz, rock, blues, salsa, bossa, soukouss, Kompa Kreol, I understand now ... Steve Gadd and Manu KATCHE! And the others too ...
An happiness guys, go for it! However if you do not really want to force the price, hit the Pearl Chad Smith is not the same basis, but it looks like the look and sound (a bit ...)
Did you find this review helpful?yesno
»
Read the 11 user reviews on the Ludwig Drums Black Beauty »