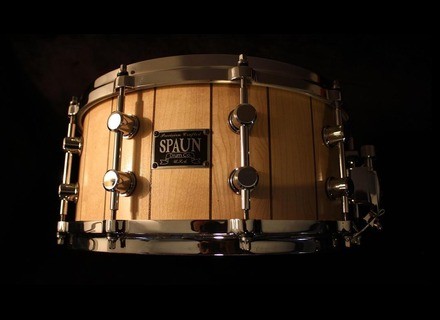 Spaun Drums Solid stave shell
5
This is a seriously awesome snare drum made by Spaun. It is available with a variety of different woods, such as maple, birch, oak, walnut, and cherry. As such, it has a tremendous range of tones. It can go from warm, to more balanced, to more resonant, to brighter or darker depending on the type of wood you choose. However, one thing that isn't debatable is the quality of the craftsmanship, as Spaun is one of the most revered drum manufacturers in the country. They all have quite a range of tones to them, and they respond really well to different players and styles of playing. Some of them will be so different between players that you won't even notice that it's the same snare!
We have one of these at my studio, a birch, and it just hits so hard but still rings through nice and easy. It's great for any genre, really, I'd say metal heads should probably avoid it because it's a little too nice for such whacking. If you play jazz, rock, blues, r&b, this is a great snare to have. I'd certainly rank it amongst the best I've ever heard.
Not being a drummer personally, I can't really say I have played it well, but I did try playing some paradiddles and stuff on it, and I was amazed at how different it sounded with different dynamics and articulations (even though I butchered most of what I played!). When my drummer friend came through, however, I really saw how drastically different it was.
Anyway, long story short, this is a great snare whatever wood you decide to get. It's going to be really expensive, though, so make sure you save up! If you've been playing more than 15 years or so, and you have the money to spend, this is something you should definitely have.
Did you find this review helpful?yesno
»