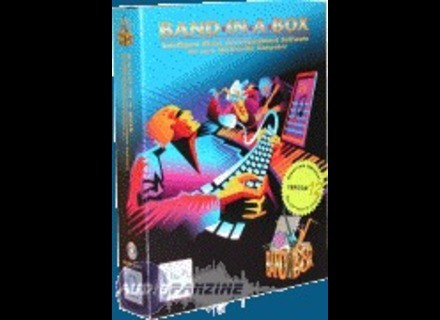 Band in a Box 8, Software Arranger from IPE.

All user reviews for the IPE Band in a Box 8

IPE Band in a Box 8
This program will simulate a real band. It's designed for practice mostly, I doubt anybody would seriously try to make music with it. It basically allows you to type in a lead sheet and pick a style for the "band" to play it in. The idea is that you can play over it to work on music. I have used it in this capacity and it's a good way to practice if you can't play with a band. I didn't have any compatibilty issues or anything, and I had no problem setting it up and getting started. Everything you'd need it to do is pretty obvious and easy to find.

The software has never given me any problems. It's stable with the configuration, considering you don't really need outboard gear to use it (though having a midi keyboard will allow you to simply play the chords instead of writing them out, which makes it easier if you're a pianist or keyboardist). The performances that the "band" gives are pretty weak, but that's too be expected with synthetic music. It's actually a little more detailed when you get into the "solo" features. The solo feature will play a solo over the chord progression that you have written out, and it will actually let you pick solos in the style of famous musicians like Coltrane, Miles Davis, Benny Goodman and others. There are plenty of options for styles, too, so if you are playing any genre of music that's pretty established, chances are you'll be able to find something that's pretty comparable to what you need to practice. I've been using it for a few years now, and I use it less now but if I really need to play a solo over a complex chord change, this is usually the first place I go to practice it after warming up and playing the scales/arpeggios.

The only thing this can really be used for is practice. It's the best way to simulate a band easily and with little effort and attention to detail. I definitely think that the instrument sounds leave a lot to be desired, but if anything it only makes you appreciate playing with a live band more! I think that in reality, only jazz musicians will have a lot of use for this, since rock music tends to be simpler (though not always), and the only music with changes that are really complex is jazz. I think it's a little overpriced, but if you are limited in your options, it's worth it. I wouldn't buy it again now simply because I'm not playing jazz as often, and I doubt I'd get my money's worth. I've also grown as a player and I can always rehearse with a band nowadays, which is way better since it allows you to play off of the other musicians, which isn't possible with a mechanical band playing really straightforwardly like this. The sound isn't that great, and the solos they play aren't always that accurate or good, even. I haven't really tried a similar program at all, but if there's one that's better than this I'd be interested.
Did you find this review helpful?yesno
Cookies help us improve performance, enhance user experience and deliver our services. By using our services, you agree to our use of cookies. Find out more.