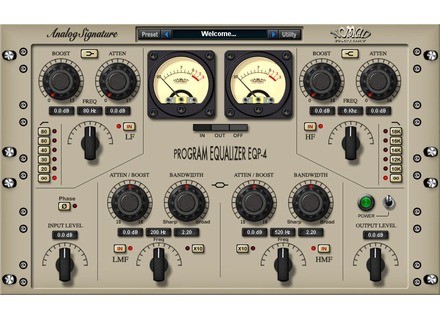 All user reviews for the Nomad Factory Program Equalizer EQP-4

Nomad Factory Program Equalizer EQP-4
4
Nomad Factory's Program Equalizer EQP-4 is an equalizer plug-in designed for a variety of different platforms. I didn't have any issues at all, compatibility or otherwise, related to installation as it was virtually a pain free process. Just follow the simple step by step instructions that come up on the screen as you would with any piece of software, and you should be all set within a matter of minutes. The interface of the software definitely has a lot going on for an equalizer, but this added control is definitely something that I like as it gives you a ton of control over your final sound. It is reminiscent of a Pultec in terms of it's make up, since it is a program EQ. The plug-in has four bands, with an added high and low pass filter as well. Each band has knobs for boost and attenuation, a space to input your desired frequency, as well as a bandwidth switch. The high and low pass filters have about five different frequencies to choose from, which I find is more than enough. The plug-in then has input and output knobs, and metering for each as well. I haven't seen a manual for the EQP-4, so I can't comment on it.

Right now I'm running the Nomad Factory Program Equalizer EQP-4 plug-in on a Mac Book Pro that has a 2.2 Ghz Intel Core 2 Duo processor and 4 GB of RAM. I run the plug-in in Pro Tools 8 that I run with a Digi 002R audio interface of a Digidesign Micro Box if I'm on the go. Thus far in the months that I've had the plug-in, I can't say that I've had a problem running it within this configuration. Of course every system is different, so it's hard to tell how well this would run on other systems. I will say that it definitely does take up a bit more processing power than your average plug-in, so I would stray away from running one on every track unless you've got an HD system...

The Nomad Factory Program Equalizer EQP-4 is overall a very powerful EQ plug-in that offers up a lot of control over your sound. I'm a big fan of program equalizers as I love the way they are set up and I'm used to them because of the classic Pultec models. These newer Nomad Factory 'analog signature' plug-ins definitely have a warmer and thicker sound than most of the other Nomad Factory plug-ins that I've got experience with, but please don't expect this one and the others to be a replacement for true analog gear. This plug-in is cheap enough that it can be had by home studio owners, and still offers up a good enough sound that it can be used by professionals. While it might not be the first choice I'd recommend as a go to EQ plug-in, it's definitely still worth checking out.
Did you find this review helpful?yesno
Cookies help us improve performance, enhance user experience and deliver our services. By using our services, you agree to our use of cookies. Find out more.